"Engaging with Faith Organizations and Communities for Sustainable Development"

The UNSSC course taking place from 15-17 November 2016 aimed at enhancing religious literacy and engagement skills among participants, with a particular focus on human rights and gender dimensions. 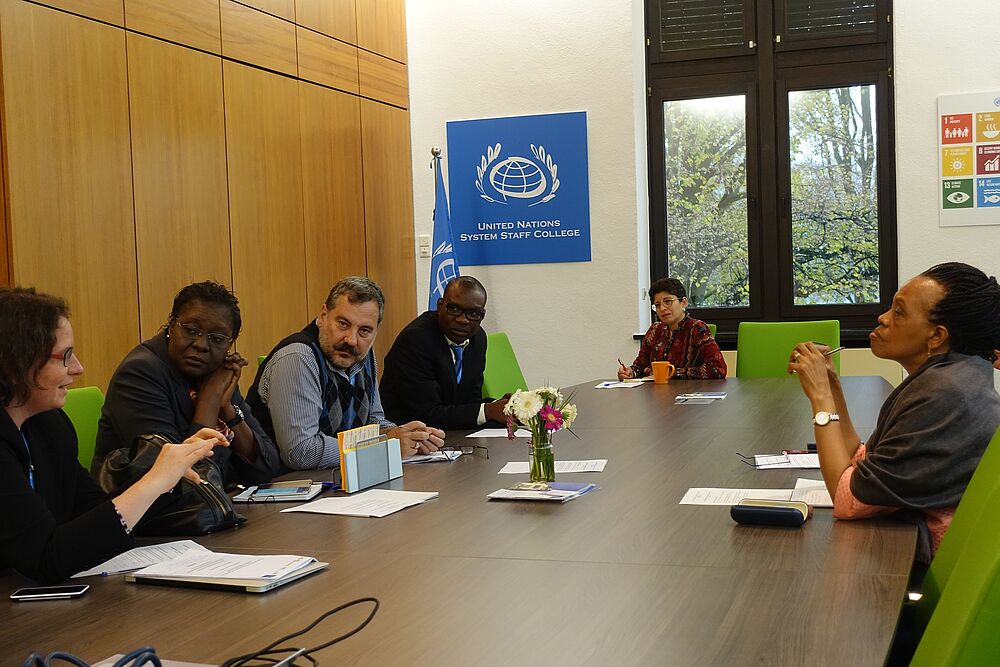 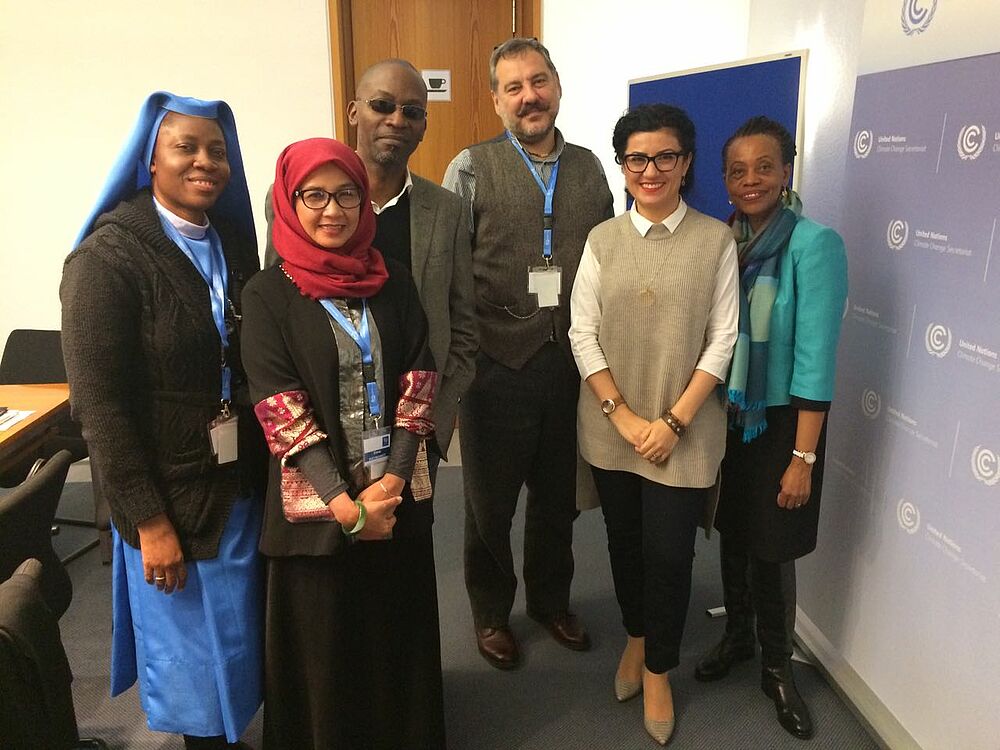 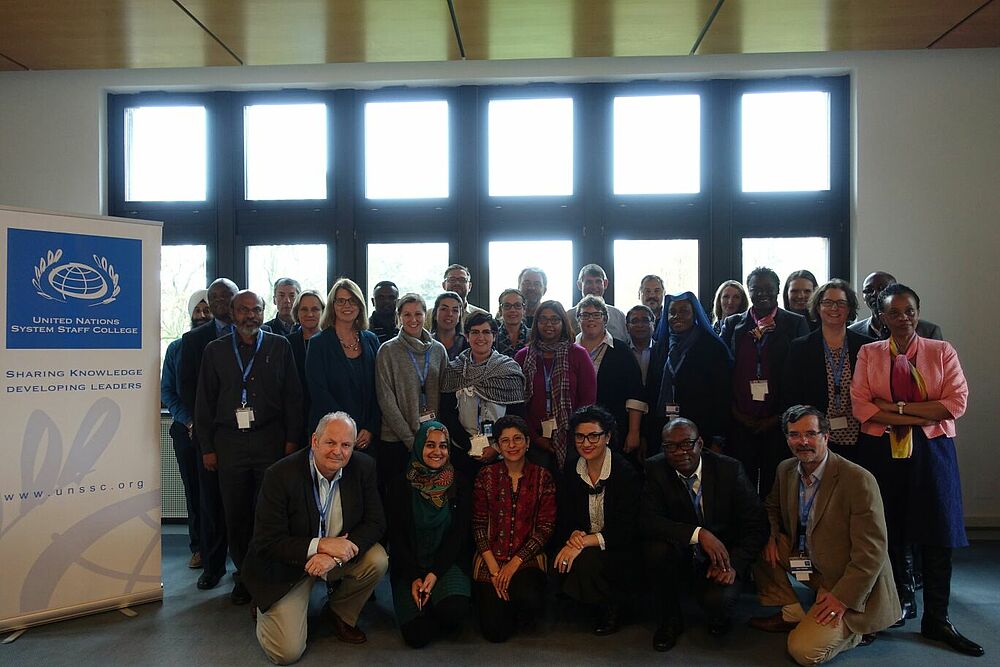 Members and partners of the Partnership on Religion and Sustainable Development (PaRD) co-convened a three day strategic learning exchange (SLE) titled "Engaging with Faith Organizations and Communities for Sustainable Development" from 15-17 November 2016 in Bonn, Germany. The course was organized by the United Nations System Staff College (UNSSC) in collaboration with the United Nations Inter-Agency Task Force on Engaging Faith-Based Actors for Sustainable Development (UNIATF), UNFPA, UNAIDS, UNHCR, and the PaRD Secretariat and aimed at increasing the attendants' religious literacy. A group of renowned experts, led by Dr. Azza Karam (UNFPA) and including Christo Greyling (World Vision International) and Aida Ghazaryan (UNSSC) facilitated the course proceedings in an interactive format. Through this, the participants from religious organisations (ROs), several UN organisations, as well as inter-governmental and humanitarian agencies were equipped with further skills and knowledge to strengthen the collaborative partnerships between their respective organisations.

Religious literacy entails the ability to discern and analyze the fundamental intersections of religion and social/political/cultural life through multiple lenses. Diane L. Moore

Drawing on a definition by Diane L. Moore, a religiously literate person is equipped with the skills to understand one or several religions and their history, traditions, and core values as well as central texts. In addition, "religious literacy" also entails the ability to identify how religion shapes and has been shaped by its environment, and in which ways religion plays a part in policy, society and culture. Briefly put, "critical to this definition is the importance of understanding religions and religious influences in context and as inextricably woven into all dimensions of human experience." (Please access the full definition in the right column.)

Participants were encouraged to assess the linkages between faith, development and humanitarian work and explored the spiritual and religious dimensions of the 2030 Agenda. Opportunities and challenges, strengths and weaknesses, as well as entry points and modalities for partnerships with faith leaders were investigated and critically assessed. Lead facilitator Dr. Azza Karam (UNFPA) explained the necessity of this approach: “To achieve the SDGs, partnerships with relevant stakeholders are essential. Especially faith organizations and communities have the potential to play an active role in supporting the necessary change and transformation.”

Panels and roundtable discussions dominated the first two days of the course, generating useful insights particularly thanks to the diverse background and experience of participants from both secular and religious organisations and agencies. For example, the question why "Preventing Violent Extremism" (PVE) is a topical issue in policy circles today was discussed in depth. One reason was found in violent extremism being described to be fairly recent and on the rise. However, in particular countries of the Global South have been affected by violent extremism for years and even decades. Learning from their experience may help those in other countries to tackle this challenge more effectively. It was emphasised that despite religion often being misused by political actors and thus becoming a part of the problem, faith leaders and religious organisations frequently engage in local initiatives working towards peace in their communities instead of further fueling conflicts.

Open discussions and sharing one's own insights opened up new possibilities for knowledge exchange among the participants.

Continuing this interactive approach throughout the whole course, each participant presented a case study from her or his own work on the second day. Ensuing, these case studies were intensively discussed in small groups and the plenary. The third and last day of the course was designed as a role play further exploring and reflecting on topics discussed on the previous two days of the SLE. While some course participants were assigned an active role, others observed and evaluated the enactment. The scenario was based on real experiences of the United Nations in Afghanistan in 2002, providing participants with the opportunity to work on concrete challenges experienced "in the field". The scenario exemplified a variety of disagreements and tensions that may arise when secular and religious actors cooperate with each other.

Providing a space to discuss individual experiences with colleagues from other organisations and countries, the course illustrated opportunities and challenges of the cooperation between religious and secular actors. In essence, the SLE pursued PaRD's vision of bringing together secular and religious actors and encouraging cooperation among one another.

If you are interested in attending the next session of "Engaging with Faith Organizations and Communities for Sustainable Development", please contact us.