“Faith, Feminism and Human Rights” and “Unlocking the Power of Faith-Based Partnerships”

The PaRD Gender Equality and Empowerment Work-Stream organized two side events to the sixty-third session of the Commission on the Status of Women. 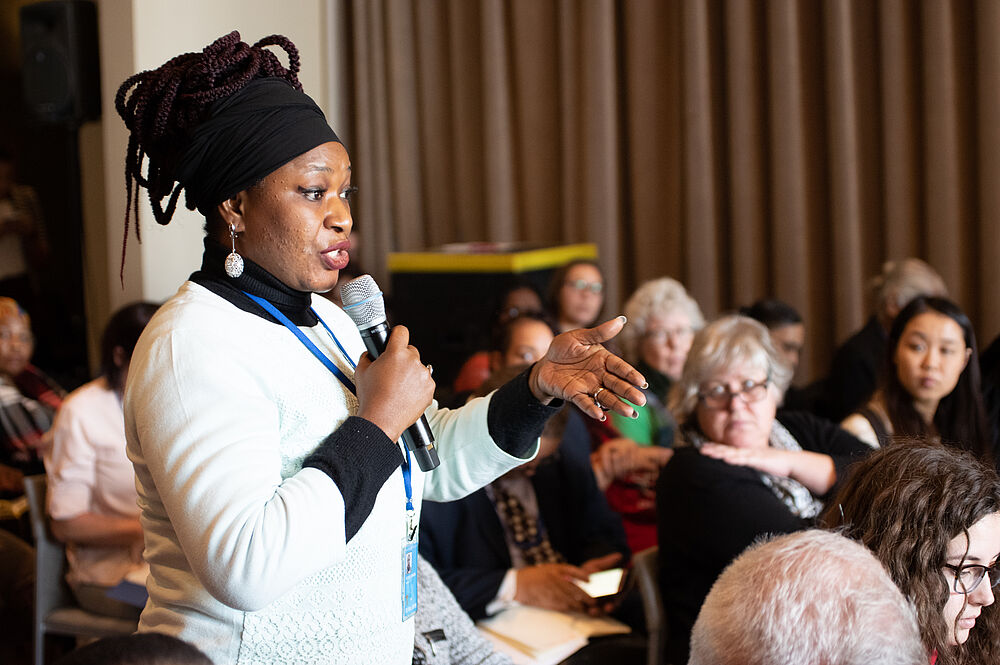 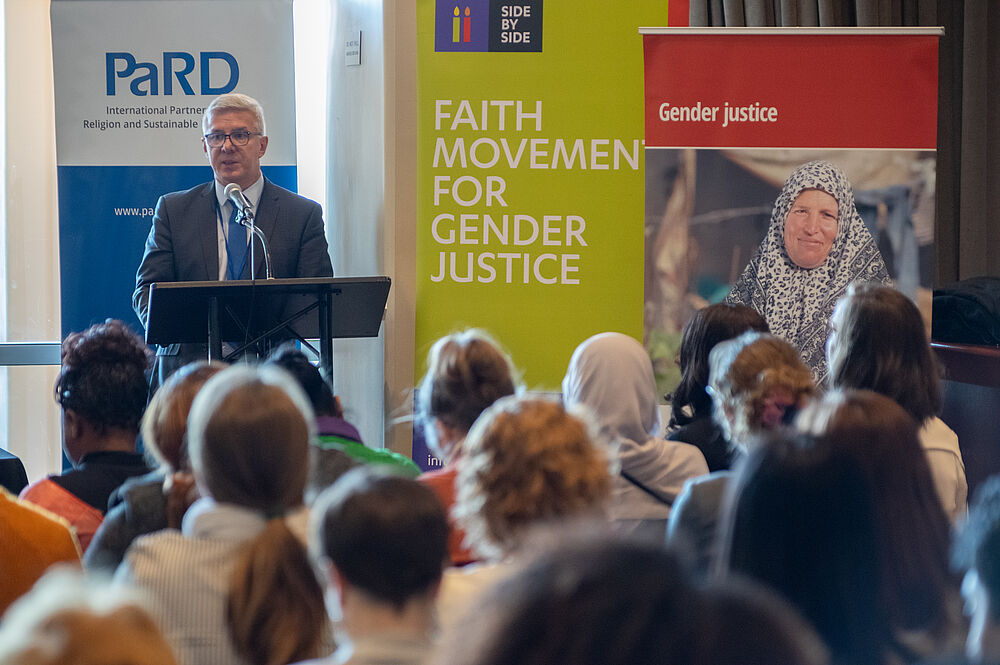 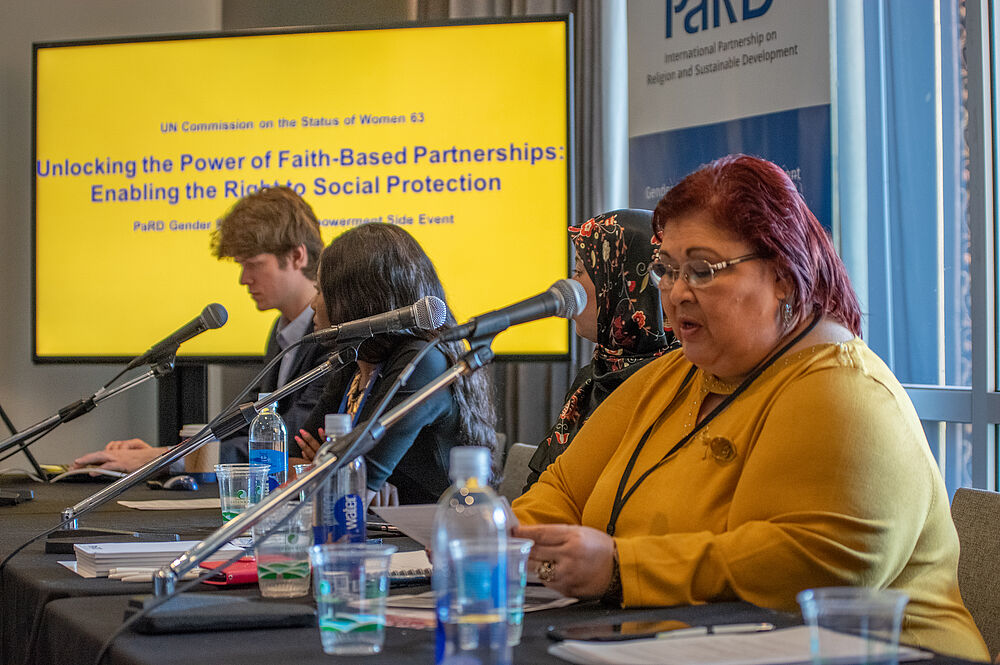 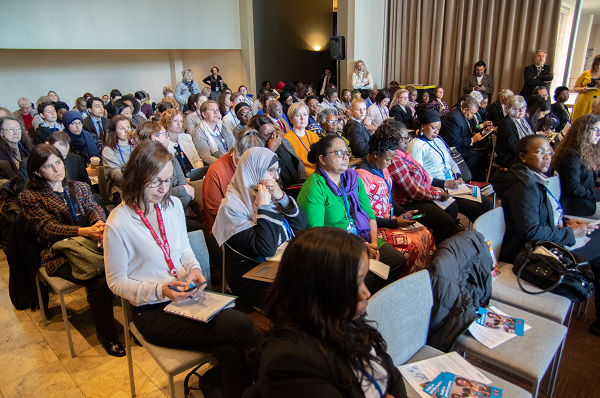 The UN Commission on the Status of Women is the principal global intergovernmental body exclusively dedicated to the promotion of gender equality and the empowerment of women. Annually, the Commission brings together representatives of UN Member States, civil society organisations and UN entities, to discuss the progress and gaps in the implementation of the 1995 Beijing Declaration and Platform for Action, the key global policy document on gender equality, and the 23rd special session of the General Assembly held in 2000 (Beijing+5), as well as emerging issues that affect gender equality and the empowerment of women. Member States agree on further actions to accelerate progress and promote women’s enjoyment of their rights in political, economic and social fields. The outcomes and recommendations of each session are forwarded to ECOSOC for follow-up.

At the 63rd UN Commission on the Status of Women, the PaRD Gender Equality and Empowerment work-stream, led by Side by Side, Global Affairs Canada and Islamic Relief Worldwide, hosted two Side Events. The events were sponsored by the governments of Canada, Denmark, and the UK, and a group of religious and civil-society organizations were co-sponsors (please see the concept notes to the right of the article).

Over the course of the two events, panelists and participants agreed that faith actors (religious leaders, religious institutions and religious/faith-based development NGOs / FBOs) have a valuable role to play in advocating for gender equality and the empowerment of all women and girls.

The events prove once more the paramount role religious actors play in challenges communities around the world face daily. The importance of engaging and working with faith actors, who are consistent and influential voices within communities, was reiterated - particularly because faith actors, in many local contexts, play a major role in influencing the socio-cultural status of women and girls in all their diversity.  Both events featured lively discussions by not cutting out controversial aspects, allowing participants to draw on the expertise brought together.

Please find brief summary reports on both events below. Please refer to the links to the right for further information on Gender Equality and Empowerment, SDG 5, and the CSW by PaRD members.

The first PaRD side-event was hosted at the Canadian Permanent Mission in New York City. Over 70 participants attended and engaged in the lively discussion, including many representatives from the Global South. The panelists discussed the different frameworks – human rights, feminist and faith – that are used to enable gender equality and the empowerment of women and girls. The discussion also focused on identifying different avenues for how these different frameworks are, or can be, interconnected.

In her opening statement, Catherine Boucher, Counsellor at the Canadian Permanent Mission, reaffirmed Canada’s commitment to PaRD’s mission and the importance of engaging with faith/religion based actors in Canada’s efforts to help achieve gender equality and sustainable development. Ensuing, participants observed a minute of silence for the victims of the attack in Christchurch. Many agreed that the attack reconfirmed the urgent need for meaningful interfaith dialogue and education, requiring all involved parties to move beyond simply listening to one another, but instead to fully engage and challenge each other. Sharif Aly, CEO of Islamic Relief USA, also contributed opening remarks, which emphasised the importance of partnership, and working as faith actors to advance gender justice. The Prophet Muhammed’s teachings direct followers to look out for women and this speaks directly to the SDG5 Goal on Gender Equality and Empowerment.   Following up from a Christian standpoint, Josephine Mukwendi, MenEngage Africa Training and Youth Coordinator at Sonke Gender Justice, acknowledged how Jesus challenged the patriarchal and social norms of his time as well.

Bani Dugal, Principal Representative of the Bahá’í International Community to the United Nations, offered recommendations on finding alternatives to patriarchal structures in religious communities. These include the need to re-evaluate what it means to be masculine and feminine and to address deep seated beliefs about women and men as well as to consistently include men and boys within our efforts at community level.

Shaykha Tamara Gray, Executive Director of Rabata, highlighted the prominent place occupied by religious leadership in the Muslim world. She noted that women leaders are present in Muslim communities, but are often less visible to the general public. To help address this, Shaykha Gray highlighted the importance of “digital religion” which helps to flatten hierarchies and provides an opportunity for women Muslim leaders (and others) to take the microphone.

Subsequently, Ulrich Nitschke, Head of the PaRD Secretariat, stressed the importance of collecting and analyzing disaggregated data to support better decision making and help design initiatives that address the specific needs and realities of all women and girls. However, in certain local contexts, collecting this data is a considerable challenge because some faith leaders have been known to act as gate-keepers of data in their communities.

Rev. Fedis Nyagah, Programme Coordinator, Council of Anglican Provinces in Africa and USPG partner, emphasized the need for close attention to the language chosen when cooperating with religious actors: He noted that many faith leaders may be hesitant to act in accordance with a feminist approach in their communities. Instead, many leaders will agree to use anti-sexism and anti-misogyny related language in their work, preferring to avoid specific wording related to feminism.

Concluding remarks were given by Solange Mukamana, Leader of a Survivor Movement in South Africa, working at Tearfund. Solange offered powerful recommendations about how GBV survivors must be part of such conversations. She also pointed out the crucial importance of strong partnerships to tackling gender inequalities.

Overall, panelists and members of the audience consistently reiterated the necessity of engaging with faith leaders on difficult and sensitive issues to help protect and promote human rights in communities.

March 18 - Unlocking the Power of Faith-Based Partnerships: Enabling the Right to Social Protection

The second PaRD side-event was held at the UNHQ and attended by over 130 civil society and governmental representatives. The panel discussed how faith-based partnerships are enabling the right to social protection, by challenging gender-norms, and stepping in when the state and society fail to deliver social protection, which was the theme for the 63rd UNCSW.

Offering opening remarks, H.E. Ambassador Martin Bille Hermann, the Permanent Representative of Denmark to the United Nations noted that we need to consider religion and cultural norms in our development efforts in order to bring sustainable change at community level. These types of efforts are often sensitive, but they are necessary.

Opening remarks were also offered by ACT Alliance General Secretary Rudelmar Bueno de Faria. Rudelmar shared how civil society including religious organisations play a central role in holding governments accountable in challenging unfair and corrupt structures in general. However, for civil society and faith actors to perform this critical goal, there are needed to be an enabling environment for civil society to do so. It is therefore important for governments to protect the space for civil society which is shrinking in many countries. Speaking on the specific issue of Gender equality and empowerment, Faith actors are in some situations perpetrating patriarchal, social and cultural norms that fortify gender inequality. On the other hand and often less visible to the public, he emphasized their significant role in challenging social and cultural norms and in advancing gender justice.

Dr. Elisabeth le Roux, Research Director at Unit for Religion & Development Research, Stellenbosch University, gave an overview of conclusions of a research project commissioned by PaRD’s Gender Equality and Empowerment work-stream to help address a lack of robust research on religion, development and gender-based violence. The report will be made public in the coming weeks.

Subsequently, Axsa Charles Gabagambi, Gender Adviser at both the Evangelical Lutheran Church in Tanzania and Side by Side member spoke of the difficulties for women and youth in accessing social protection services in Tanzania, particularly those related to Sexual and Reproductive Health and Rights (SRHR). She noted the Evangelical Lutheran Church’s considerable efforts to engage with members of local communities, particularly with parents and religious leaders to discuss gender concepts and notions related to identity and with boys and men on positive masculinity. She acknowledged that this work is often difficult in a national context, where there is shrinking civic space and in which social protection is used as a political tool, instead of a human right.

Rabbi Diana S. Gerson, Associate Executive Vice President, New York Board of Rabbis spoke of the fact that no matter the faith, no religious teaching condones gender-based violence. However, faith leaders all too often do not acknowledge gender-based violence (GBV) as a reality. Yet, in all corners of the world, faith leaders offer council and leadership to members of their communities. They are often “first-responders” when members have problems and thus need to be included in efforts allowing them to address GBV.

Suzy Ismail, Founder of Cornerstone, shared stories she had encountered when travelling to the border of Syria, in particular acknowledging the hardship encountered by women and girls. Suzy emphasised that these stories, while distant, are not unfamiliar. Experiences of struggle and violence to women and girls is happening in our countries. She concluded by emphasising the role of education, and of faith based partnerships, to connect with one another and to share knowledge, and understanding.

Concluding remarks were given by Dr. Isabel Apawo Phiri, Deputy General Secretary of the World Council of Churches, who summarised the discussions shared how the WCC are promoting the Thursdays in Black campaign. Many of the WCC’s 350 member churches, national councils and ecumenical and inter-religious partners, academic institutions, student associations, and more have adopted this global ecumenical campaign to end gender-based violence around the world.