Women are not only beneficiaries of the achievement of SDG 5 on Gender Equality and Empowerment. They also need to actively contribute to its continuous implementation. This is one of the key insights of the PaRD CSW65 Side Event on Wednesday. 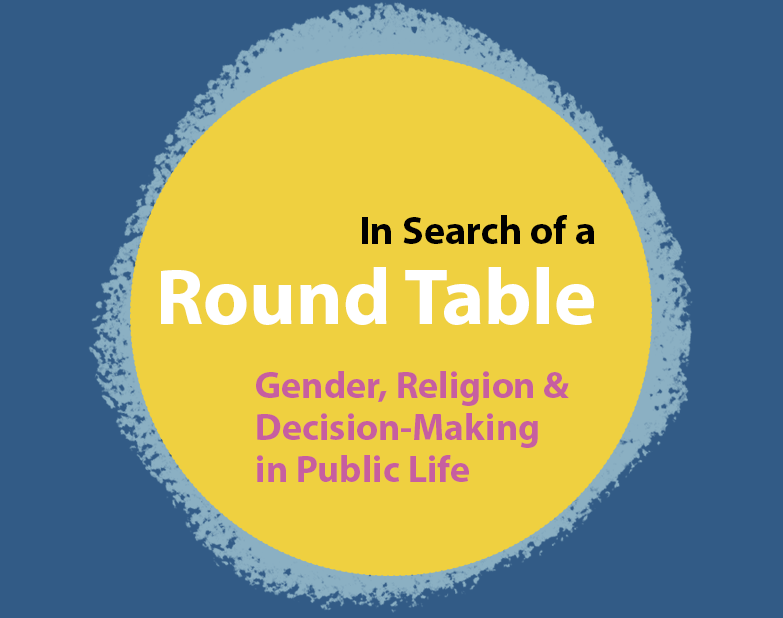 The Side Event of the UN Commission on the Status of Women 65 titled “In Search of a Round Table: Gender, Religion and Decision-Making in Public Life” was hosted by PaRD members (Global Affairs Canada, Ministry of Foreign Affairs Denmark, Federal Ministry for Economic Cooperation and Development Germany (BMZ), Side by Side, Islamic Relief Worldwide, ACT Alliance, Lutheran World Federation, KAICIID, Global Interfaith Wash Alliance, Joint Learning Initiative on Faith & Local Communities, USPG, The Network for Religious and Traditional Peacemakers). It was attended by 200 participants online.

Key challenges for the achievement of SDG 5 often lie with religious communities themselves. Patriarchal structures and gender-based discrimination within religious institutions not only exist but are replicated over and over, said Michael Suhr, Ambassador and Special Representative for Freedom of Religion or Belief at the Danish Ministry of Foreign Affairs. “Change takes time”, he said. Therefore, it is important to forge strategic partnerships with those willing to change and prepare new actions to achieve gender equality in societies.

In her key note speech, Dr. Musimbi Kanyoro reflected on the theme of women’s leadership in decision-making through the lenses of her book of Essays bearing the title “In search of a Round Table”, which was adapted for this webinar. 25 years ago, women envisaged a “Round Table”, where space is constantly made for newcomers and where all can be seen and heard. Women expected the table conversation to change because of their contributions to the agendas of governments, businesses, religious institutions, multilateral organisations, civil society and more. Today, women are still searching for the realisation of “Round Table” potentials and possibilities. Power sharing between men and women is still far from ideal. There are social, economic, racial, gender and other disparities and gaps that marginalise women and are exasperated by disasters, climate change, disease and the current COVID-19-pandemic. Kanyoro quoted Kamala Harris inaugural speech to this 65. Commission on the Status of Women (CSW65): “This year in considering the status of women, especially as it pertains to participation in decision making, we must also consider the status of democracy … the status of women is the status of democracy”.

Gender Equality requires continuous work, Dr Nora Khalaf-Elledge, consultant at the Joint Learning Initiative on Faith and Local Communities highlighted. The pandemic had revealed the fragility of gender equality. Since women have been hit hardest during the COVID-19 crisis, it became obvious how years of gender progress can be undone in an instance. To be successful in implementing sustainable gender equality, women themselves need to stop being patriarchal, Khalaf-Elledge added. On the other hand, secular development institutions needed to change their often-held view of religion as a negative impact on gender equality, which is one-sided. Gender and religion were deeply entangled, and more research needed to be done.

Rhine Toby Koloti of the United Society Partners in the Gospel (USPG), highlighted the negative role of religious institutions when it comes to power and sexual abuse based on what often has been criticised as “clericalism”. These patriarchal structures only could be disrupted by a feminist faith-based approach and by changing the language and understanding of authority and power within the churches.

Rev. Lusmarina Campos Garcia, Pastor in Rio de Janeiro and member of ACT Alliance, demanded the feminist religious discourse to be integrated into the human rights discourse – otherwise the goals of the Agenda 2030 could not be achieved, she opined. In the context of feminist theology in Latin America, she observed “violent reactions and threats” in the name of religion. When it came to Sexual and Reproductive Health Rights, women were often dehumanised. With regards to anti-gender-agendas of some governments, resistance only was possible by working and standing together, sharing information and providing funding for local initiatives.

Dr Saumya Uma, Associate Professor at Jindal Global Law School, O.P. Jindal Global University in India, pointed out that formidable challenges continue to persist at the intersections of women’s equality rights and FoRB. However, these can be addressed and women’s equality rights promoted through a coordinated effort of theologists, secularists and feminists. Open conversations between all stakeholders, without mutual suspicion and distrust are a key to such efforts, which must be holistic and inclusive. Additionally, feminist interpretations of religious texts should not only be acknowledged and promoted but also mainstreamed. Finally, religious communities needed to address discrimination against women in their own institutions, with equal access for women to religious leadership.

Zaida Bastos, Director of Development Partnerships, The Primate’s World Relief and Development Fund, underlined that FoRB activists do not support child marriage, Female Genital Mutilation (FGM), honour crimes and other gender related challenges. On the contrary, FoRB protected Civil and Political Rights as they were mentioned in the Beijing Declaration and the Platform for Action. Religious and Faith-based organisations have been historically engaged for the SDGs and should build synergies with civil society to advance in the achievements.

"It is high-time not only to change the conversation on gender but also to change decision-making and be more inclusive - this is what human rights and democracy is about."

The new PaRD Head of Secretariat, Khushwant Singh, pointed out that COVID-19 has exacerbated inequalities and those who were already left behind are suffering even more, including women. The pandemic at the same time showed how interconnected and vulnerable our lives were and that intersectional approaches were needed, also in tackling all forms of inequality. “It is high-time not only to change the conversation on gender but also to change decision-making and be more inclusive - this is what human rights and democracies are about”, he said. “Let us keep joining our hands, for example in PaRD to discuss such urgent and sensitive matters. PaRD its such a round table, a multilateral partnership at equal levels – which provides a safe space – where we work together to advance gender justice and contribute with concrete results to the Agenda 2030. I hope that more women and men from governments, and also from other religions, including Baha’i, Buddhists, Daoists, Sikhs will join in future round tables and share ideas and a way forward in a respectful manner.”

Moderator Sadhvi Bhagawati Saraswati, PaRD Steering-Group member and Secretary General of Global Interfaith WASH Alliance, concluded that it was important to share and serve each other on the way to Gender Equality – with all sitting at one table and room for people to join.