The event brought together 40 youth from over 32 countries in Africa and Europe alongside experts and practitioners in the fields of interfaith dialogue, PVE, and de-radicalisation. 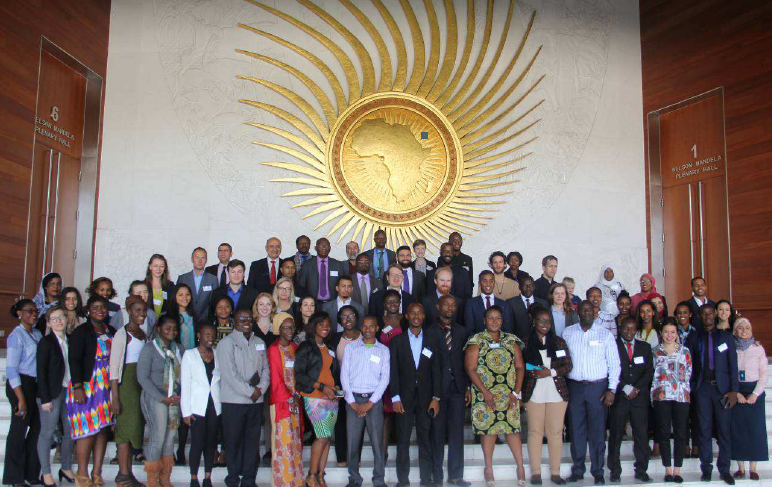 On 21-23 February 2017, the Interfaith Dialogue on Violent Extremism (iDove) organised a three-day Intercontinental Youth Forum (IYF) at the Africa Union headquarters in Addis Ababa, Ethiopia. The IYF was co-launched by the African Union Citizens and Diaspora Directorate (AUC-CIDO), the German Federal Ministry For Economic Cooperation and Development (BMZ) and Deutsche Gesellschaft für Internationale Zusammenarbeit (GIZ) as its commissioned implementation agency, and the Institute for Peace and Security Studies (IPSS). The All Africa Conference of Churches

(AACC) also partnered in supporting the iDove IYF. The event brought together 40 youth from over 32 countries in Africa and Europe alongside experts and practitioners in the fields of interfaith dialogue, PVE, and de-radicalisation. Key elements of iDove are to foster exchange and dialogue between youth practitioners, experts and de-radicalised persons as well as to design innovative and youth-focused solutions to tackle violent extremism.

iDove is a trans-continental interfaith dialogue programme on preventing violent extremism (PVE) that aims to bring together African and European stakeholders, particularly faith-based and interfaith organisations, to formulate contemporary recommendations and activities to counter violent extremism by drawing on the soft power of religion and dialogue. It aims to strengthen inter and intra-religious efforts and strategies in PVE. It promotes conflict prevention, peacebuilding and reconciliation and aims to strengthen the resilience and social cohesion of communities and societies. Based around three core pillars, iDove pursues a cutting-edge approach to utilise technology in countering the recruitment of youth into violent extremism: (1) iDove works towards the de-radicalisation of youth, and trains stakeholders in PVE, for example by training of trainers (ToT) programmes; (2) iDove promotes values of tolerance, mutual respect and better understanding centred around intra- and interfaith, inter-religious and inter-cultural values; (3) iDove implements small scale initiatives developed by youth leaders.

Unique to the IYF is the focus on the youth and the distinct emphasis on two types of violent extremism, namely religious and Right Wing extremism.

Putting the “youth in the lead”, taking them, their grievances, sorrows and especially their potential seriously while demanding their full participation and support in return, is the key to success for the project. Therefore, the main objective of the IYF was to inform and empower youth and draw their attention to various existing types of radical ideologies, provide them with scholarly understanding of the mind-set of individuals who turn to extremism, and supplement this with testimonies of former extremists. The exchange with de-radicalized persons on the negative power and impact of violent extremism has been a tremendous experience for the youth and offers great potential for joint efforts towards de-radicalization.

The forum hosted a wide range of distinguished speakers. These included Bjørn Ihler, survivor of the Utoya terrorist attack in Norway and PVE practitioner who uses technology and theatre to build peace, and Dr. Amr Abdalla, Professor and Vice Rector at the Institute for Peace and Security Studies (IPSS), who illuminated how violent extremism is wrongly perpetrated in the name of religion. Other Speakers, like Dr. Nageh Ibrahim, shared their own personal de-radicalisation experiences and their perspectives on PVE and root causes of violent extremism. A special highlight was the appearance of H.E. Adama Dieng, UN Secretary-General’s Special Adviser for the Prevention of Genocide. In his welcome note, H.E. Adama Dieng addressed

“the populist threat emerging in liberal democracies undermining the values and freedoms that these societies were originally built on.”

Following this assessment, H.E. Adama Dieng stressed the necessity to counter the current development and the potential of foremost the youth to promote tolerance, mutual respect, and a better understanding of the other.

During discussions, it was emphasised that reducing the many dimensions of violent extremism to terrorism in the name of Islam is reductive and could lead to polarisation among and between communities. The international nature of the youth forum enabled participants to identify and contrast the drivers of radicalisation in different countries and regions important to craft effective responses sensitive to each context. From the IYF’s panel discussions, “iDovers” (as they began self-identifying) learned that de-radicalization and re-integration in society of former extremists is always a possibility. Participants agreed, that religious actors and interfaith organisations are a crucial part of establishing a counter movement to the international networks used by radical groups to transmit their messages. During the forum, participants established the iDove Network of youth activists and experts to collaborate and facilitate knowledge exchange long after the forum itself. The network aims to share best practices as well as facilitate capacity building on PVE, with a focus on small youth-led and community-based initiatives including interfaith cooperation. Participants concluded that spreading messages of peace and common values such as tolerance, mutual respect and education, would be facilitated by providing both online and offline safe spaces for dialogue, including on contentious religious and identity matters for youth and adults alike. One of the most promising results of this first IYF has been the creation of small scale projects including both practitioners and experts of PVE which will continue their common work of developing unique approaches towards PVE.

While the youth is one of society’s most vulnerable groups when it comes to violent extremism; the experiences of the IYF demonstrate that the youth, based on their energy, creativity and willingness to shape the future, are also our greatest hope for challenging violent extremism. Thus, we are looking forward to the next steps of iDove and welcome all current and future members and partners of PaRD to participate and support this project.