The report highlights important achievements of the UN Task Force and its members working on the intersections of religion and sustainable development. 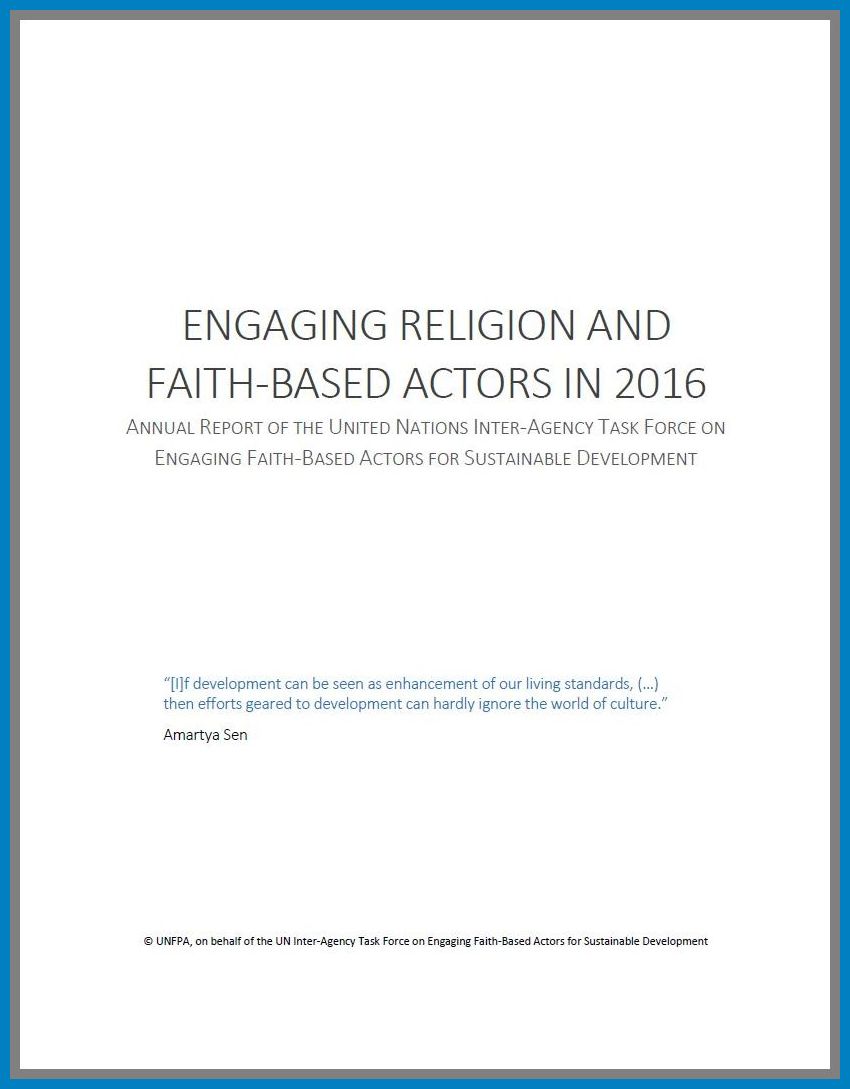 The annual report provides an overview of the engagement with faith-based actors and faith-related activities by the members of the United Nations Inter-Agency Task Force on Engaging Faith-Based Actors for Sustainable Development (short: UN Task Force on Religion and Development or UNIATF). The history of the UN Task Force on Religion and Development reaches back to 2007 when some members came together informally for the first time. In June 2010, the principals of the various UN developmental entities approved the official formation of the UNIATF. The latest report, covering the year of 2016, continues to present the annual highlights of this work as it was done for the first time in 2015 through the first UNIATF report covering the period from 2013 to 2015.

In 2016, UNIATF continued to focus on knowledge and policy exchange on the intersections of religion and sustainable development, sharing experiences of and lessons learned from partnerships with FBOs within the UN, and strengthening the integration of reliable FBO partnerships within the UN system’s broader civil society outreach.

During the 2016 General Assembly, eight faith-related side events were organized by UN Task Force members, in collaboration with different FBOs and/or governments. For instance, UNFPA, UNAIDS and UN Women, in collaboration with the World Council of Churches, Islamic Relief and the Wijngaards Institute, co-hosted a side event entitled “Keeping the Faith in Development – Religion, Gender and Health”. Also during the 2016 General Assembly, the UNIATF in cooperation with, among others, OGPRtoP, the World Council of Churches, the KAICIID Dialogue Centre and PaRD convened a consultation entitled “Bearing Witness: Combating Human Trafficking and Forced Migration”. During three high-level panels, the role of FBOs in combatting human trafficking and forced migration was discussed.

Also in 2016, members of the Task Force continued their support for the establishment of the International Partnership on Religion and Sustainable Development (PaRD), which they viewed as a natural institutional continuation of the DUF (Donor-UN-FBO) policy roundtables initiated since 2013. PaRD is a new global platform which brings together bilateral donor countries, multilateral development agencies and civil society organizations – particularly FBOs – to harness the positive impact of religion in sustainable development and humanitarian assistance.  To date, 8 out of the 16 PaRD members are also members of the UNIATF: UNAIDS, UNDP, UNFPA, UNICEF, UN Women, OGPRtoP, WFP and the World Bank.