“Be loud, be challenging”

PaRD meeting in Berlin: The role of religious actors in the implementation of the 2030 Agenda can’t be ignored by politicians. 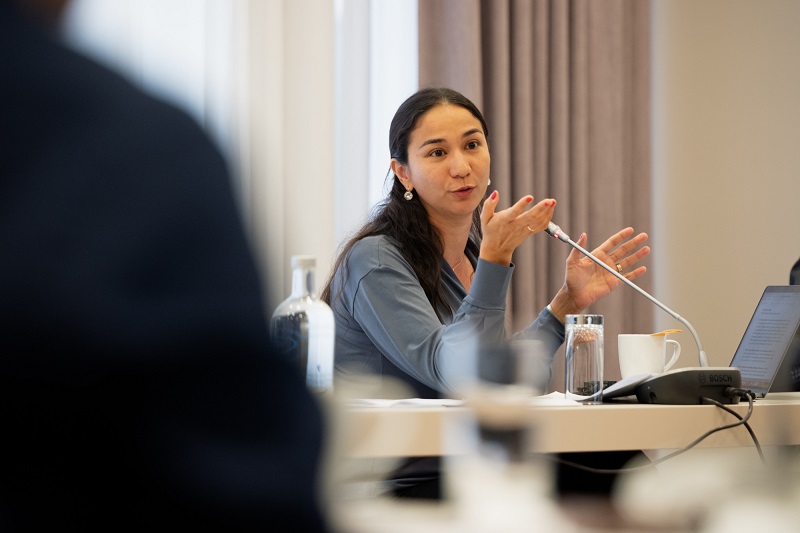 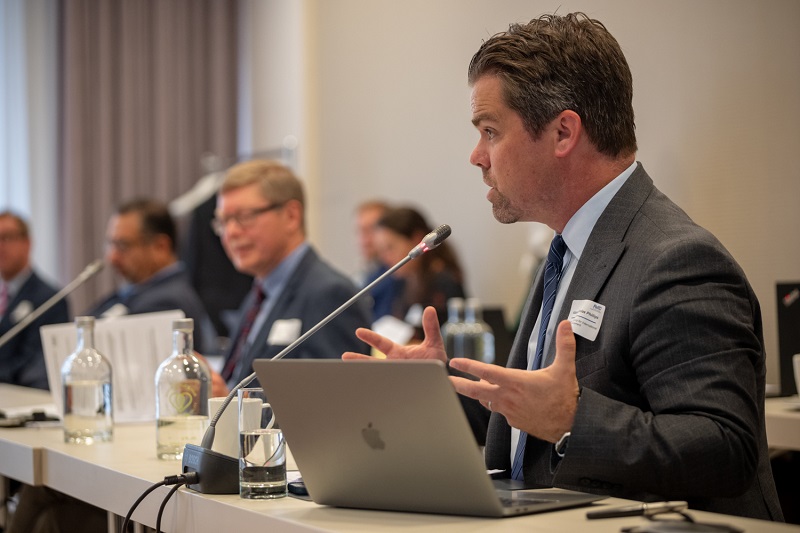 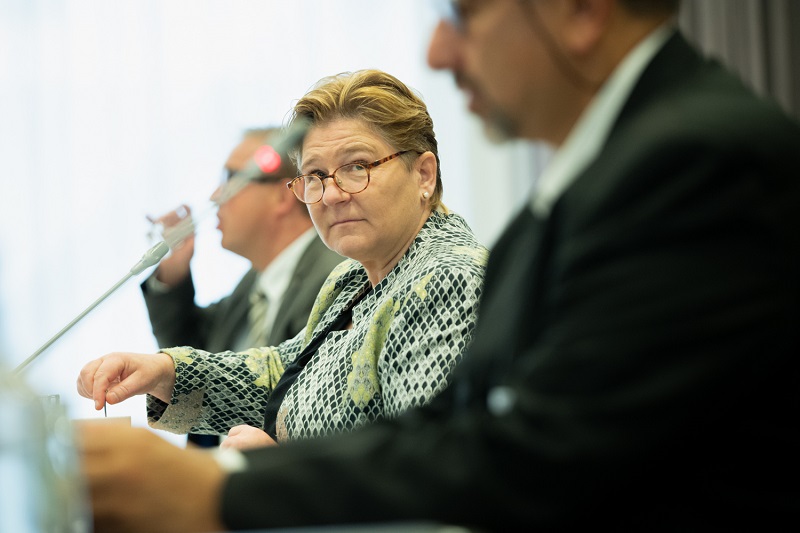 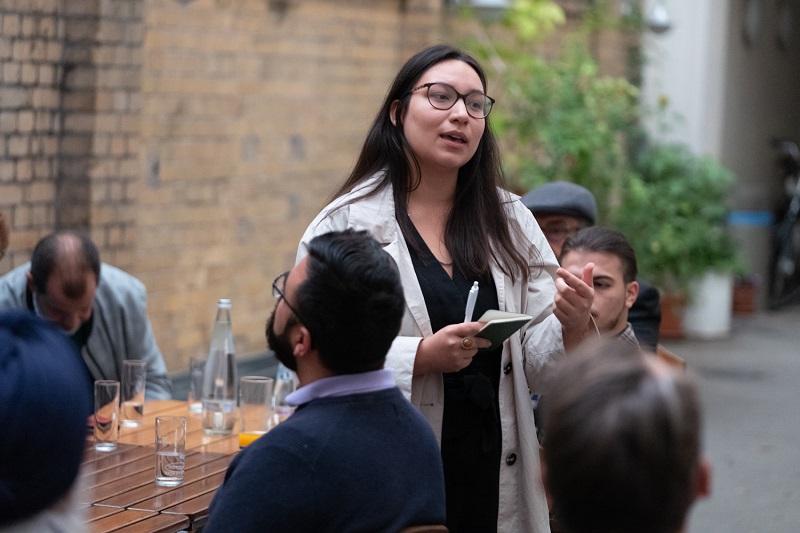 Gabriela Paredes from Christian community, along with Husseim Stuck from the Bahai and Yavuz Boege from the Muslim community Berlin share their experiences with PaRD members in peace work, with hate speech and discrimination. © GIZ/PaRD by Maurice Weiss 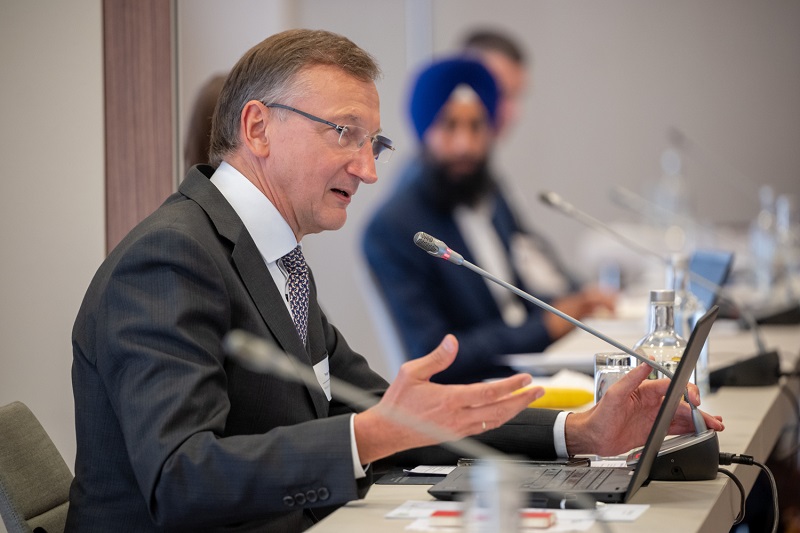 Peter Prove, PaRD Steering Group member and Director of Commission of the Churches on International Affairs at World Council of Churches (WCC). © GIZ/PaRD by Maurice Weiss 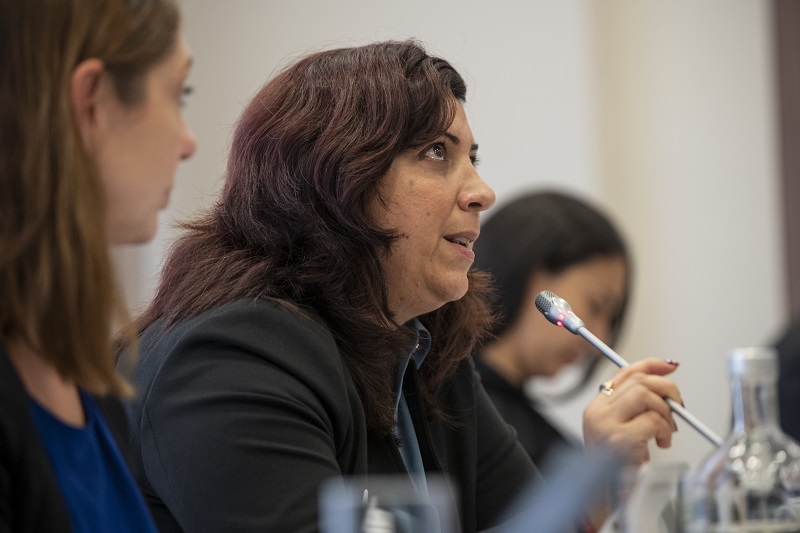 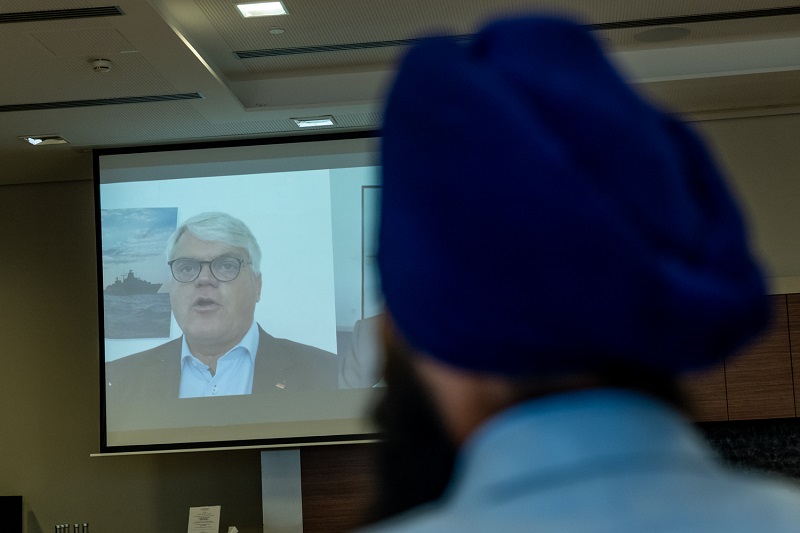 Markus Grübel Federal Government Commissioner for Global Freedom of Religion, speaking to PaRD members about the importance of FoRB. © GIZ/PaRD by Maurice Weiss 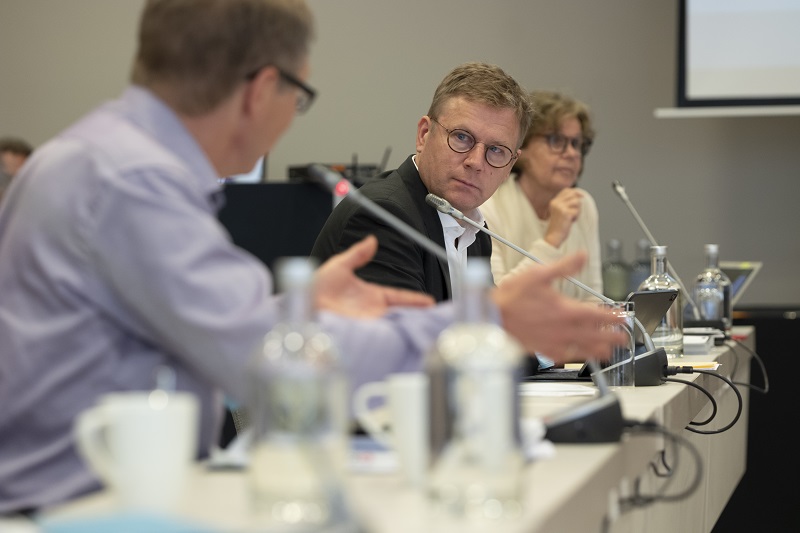 Michael Suhr, Ambassador and Special Representative for Freedom of Religion or Belief of the Ministry of Foreign Affairs of Denmark. © GIZ/PaRD by Maurice Weiss 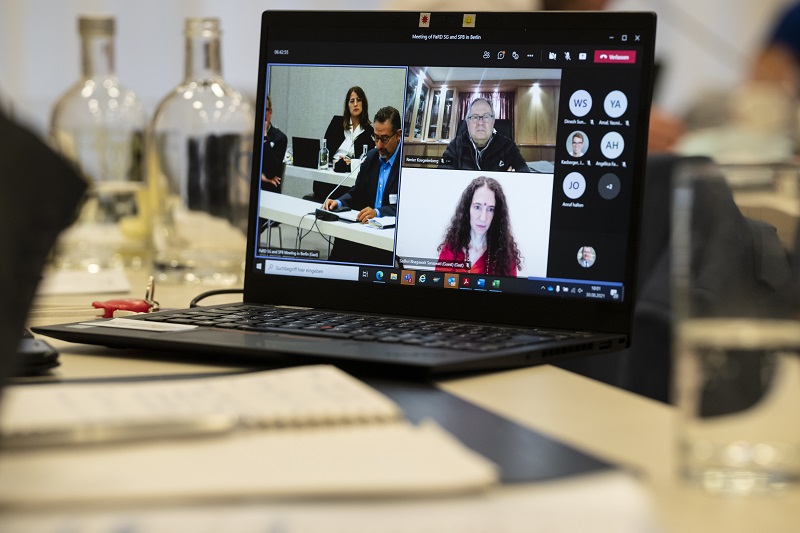 PaRD members from South Africa, India and many other countries participating online during the hybrid meeting in Berlin. © GIZ/PaRD by Maurice Weiss 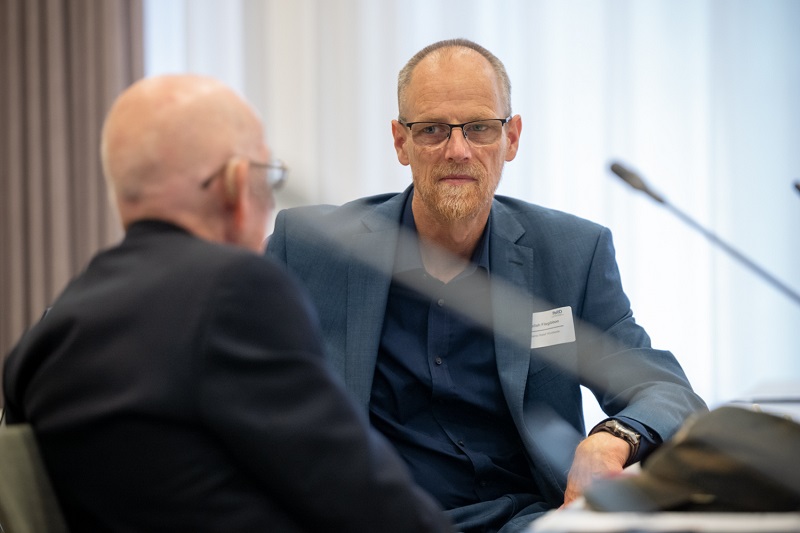 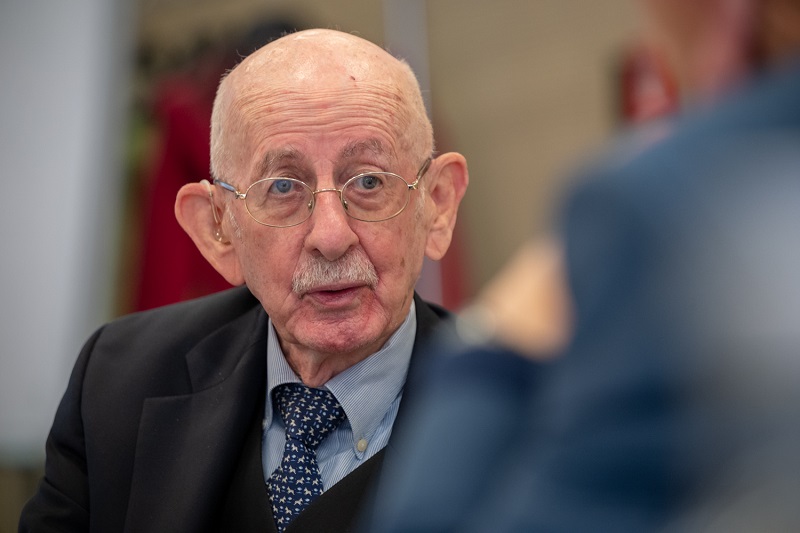 Timothy Lavelle from USAID participated at the PaRD Steering Group and Strategic Planning meeting in Berlin. © GIZ/PaRD by Maurice Weiss 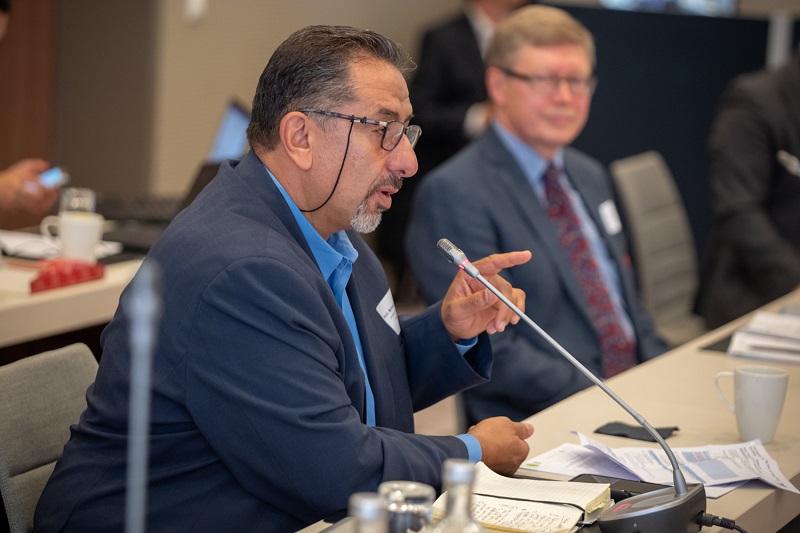 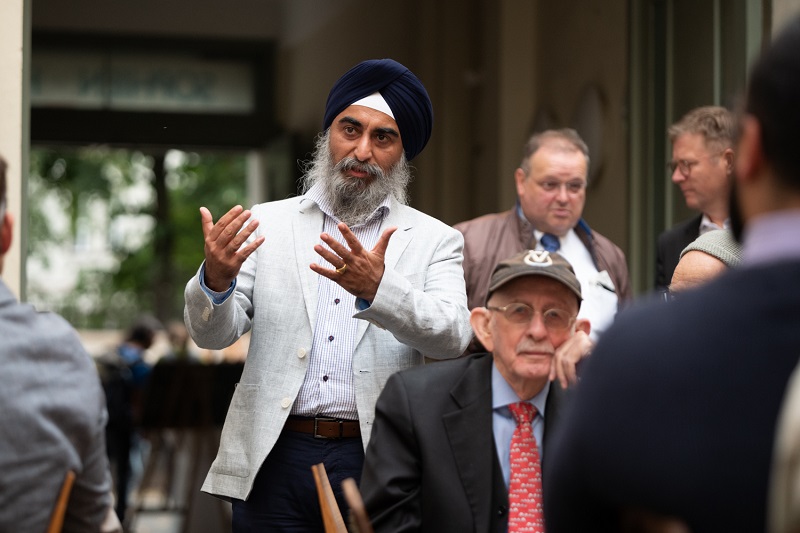 When it comes to social services and emergency relief, religious actors are close to the people in need and the driving force according to Prof. Claudia Warning. Speaking with members of the International Partnership on Religion and Sustainable Development (PaRD), Warning, a department head at the German Federal Ministry for Economic Cooperation and Development (BMZ), continued by saying that religious leaders “are a guiding compass for politics – especially in challenging times. So be loud, be visible, be challenging”. Warning encouraged PaRD members to highlight their roles in Sustainable Development and raise their voices. She was just one of the high-level speakers during the PaRD Steering Group and Strategic Planning Board Meeting in Berlin, Germany from 30 August to 1 September 2021. Around 60 participants from across the world took part in the Berlin meeting with 25 travelling to Berlin.

Religious leaders are a guiding compass for politics – especially in challenging times. So be loud, be visible, be challenging.

PaRD members from several governments, intergovernmental entities such as the African Union, World Bank, UNFPA, UNEP and KAICIID and religious organisations including Dan Church Aid/Act Alliance, World Council of Churches, World Vision International and Islamic Relief attended the meeting. Joining the meeting was also the newly appointed director of the Center for Faith-Based and Neighborhood Partnerships and Local, Faith, and Transformative Partnership Hub at USAID, Adam Nicholas Phillips, along with the Special Representatives for Freedom of Religion or Belief (FoRB) of the German and the Danish Government, Markus Grübel, MdB, and Ambassador Michael Suhr. During the meeting, newer members of PaRD had the opportunity to introduce their organisation and priorities, including Birgitte Moe Olsen from the Stefanus Alliance International, Caroline Thomas from Adyan Foundation and Mejindarpal Kaur from United Sikhs.

Religious actors are on the COVID-19 front line

With the ongoing pandemic, PaRD members see COVID-19 as a continuing priority and proposed that PaRD should take a more active role in showcasing the COVID-19 engagement of religious actors. Phillips, who is a new PaRD Steering Group member and co-chair from USAID, underscored the work of religious actors during the pandemic. “They are fighting COVID-19 at the frontline. This engagement needs to be highlighted and supported.” Maria Lucia Uribe, PaRD Steering Group member from Arigatou International, which has a strong focus on children, outlined the importance of reaching out to governments and decision-makers: “In the last five years, PaRD has done great work with building and exchanging knowledge and creating opportunities for networking. Now, we need to increase our role in policy engagement.” Newly named Head of the PaRD Secretariat , Khushwant Singh, found the ease with which the group could build consensus about priorities impressing: “We are on the same page that inclusivity and systematic government engagement in the Global South, and ensuring more diversity in PaRD are key priorities. This is a strong signal for what can be accomplished.”

No FoRB, no PaRD

PaRD members, including co-chairs Jørgen Thomson and Prof. Mohammed Abu-Nimmer, highlighted the importance of the Freedom of Religion and Belief (FoRB). The German Government’s Special Representative for Freedom of Religion or Belief, Markus Grübel MdB, stressed the urgency of FoRB engagement. He referred to the official FoRB report of the current German government, which shows a global trend of growing numbers of people who are living in countries that limit their freedom of religion, belief or even oppressing them. The COVID-19 pandemic further worsened the situation. Grübel emphasized: “No FoRB, no PaRD.”

During the meeting, members also had the opportunity to meet with a representative of the German Parliament’s Committee for Economic Cooperation and Development (AWZ) to discuss possible policy changes with regards to religion and development after the German Federal Elections on 26 September 2021.

The programme included side-events, where participants met members of the Buddhist, Christian, Muslim, and Sikh community in Berlin and learned about their engagement for peacebuilding and social cohesion, and against prejudices and hate speech.

In the Berlin meeting, the PaRD Steering Group decided to host the Annual Forum and General Assembly of Members (GAM) 2021 in South Africa from 8 to 11 November. During the GAM, members will elect Co-Chairs of the Steering Group, which is formed by governmental, intergovernmental, and religious and faith-based organisations. In the discussions, members suggested to review the work-stream structures and to strengthen the role of the PaRD Secretariat in the light of the strategic planning process started in June 2021. The Secretariat’s long-standing senior advisor Dr. Thomas Lawo received a well-deserved recognition before his planned retirement.