With over 150 participants from around 35 countries and seven religions as well as Indigenous Peoples, PaRD’s Annual Forum on Religion and Sustainable Development brought together a diversity of people, organisations, and perspectives to address the climate crisis. Approximately 50% of speakers and participants were women. Get an overview of key outcomes and recommendations on how to tackle the human-made climate crisis together with religious actors. 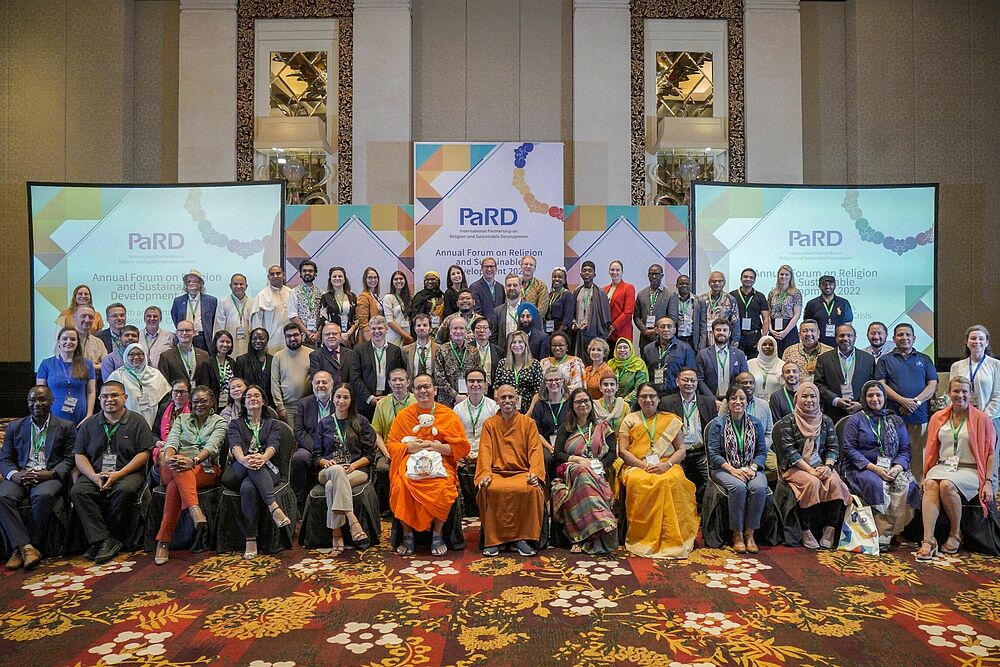 Over the four days of PaRD's Annual Forum on Religion and Sustainable Development 2022, more than 130 people participated in person. Pictured here are many of the participants from Day 3. ©PaRD/GIZ 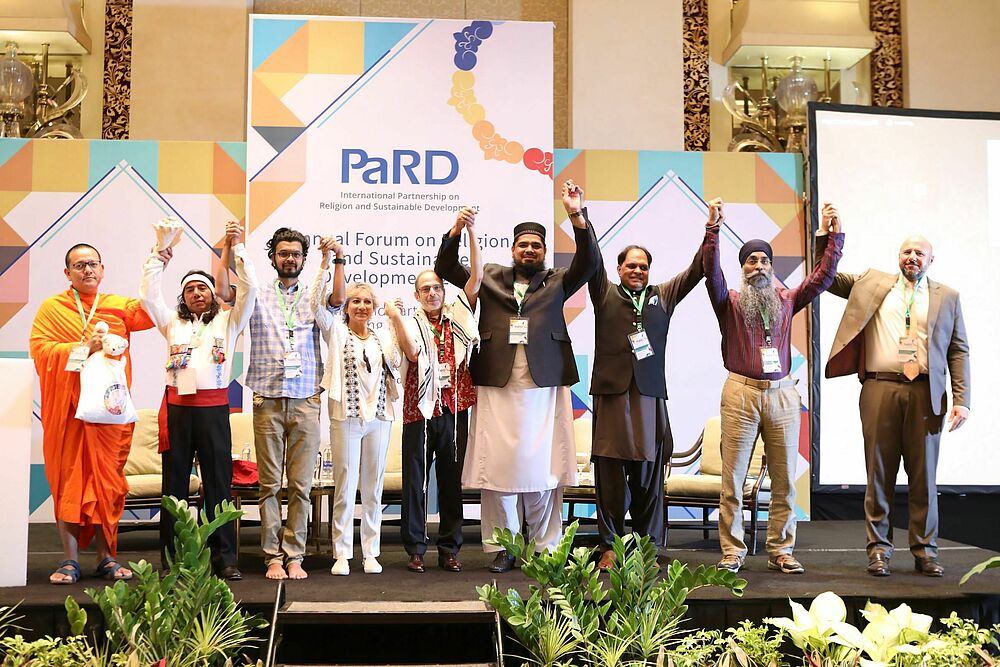 Day 2 of PaRD's Annual Forum on Religion and Sustainable Development was opened by representatives of different religions and traditions. ©PaRD/GIZ 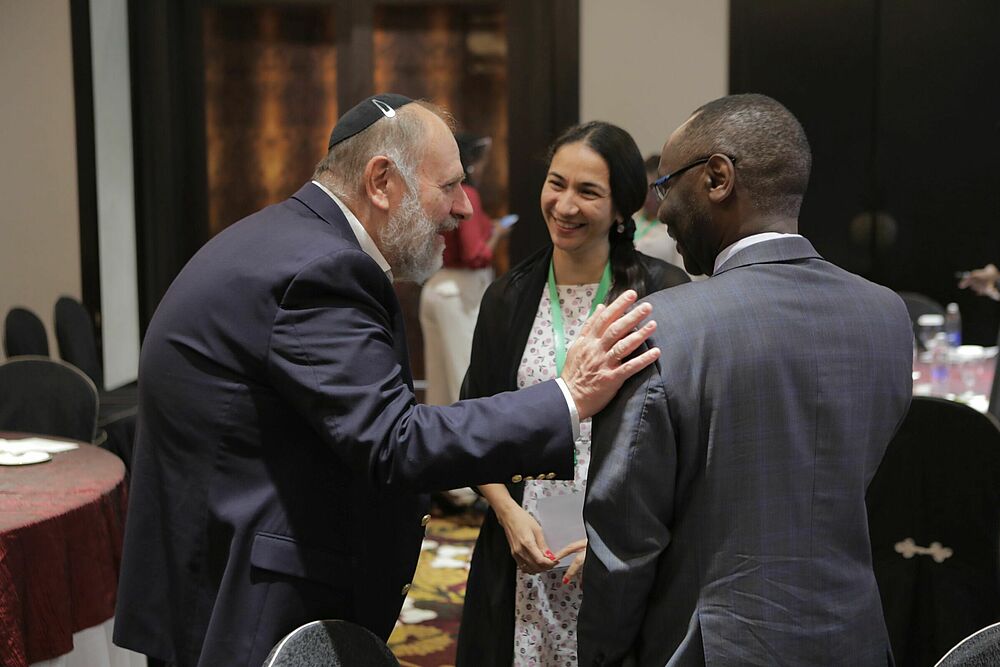 PaRD's Annual Forum on Religion and Sustainable Development was, as every year, not only an opportunity to listen to interesting lectures, but also to make new contacts and maintain existing ones. ©PaRD/GIZ 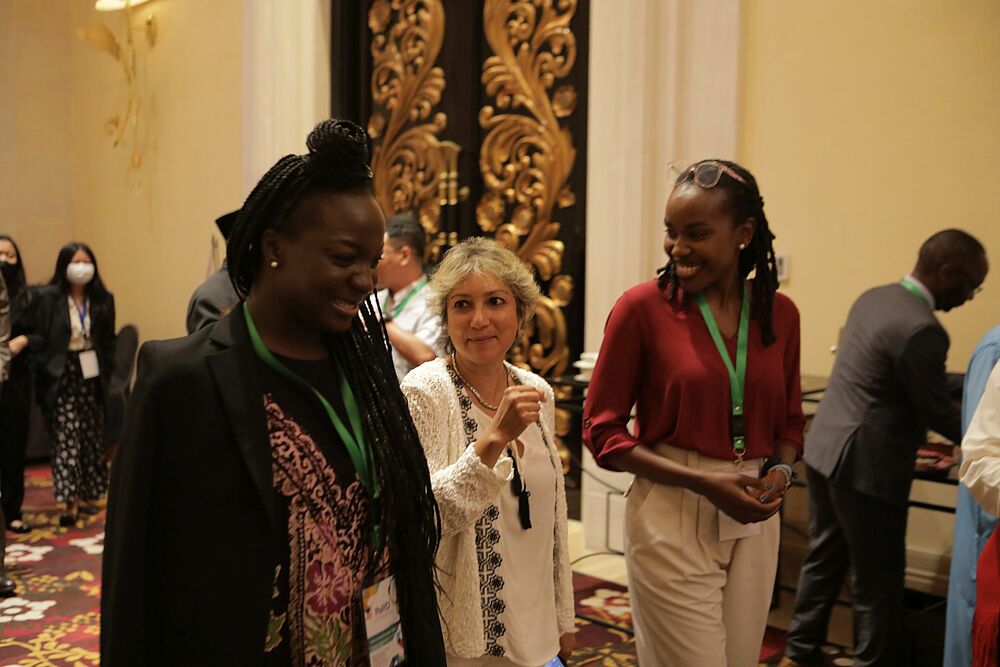 During PaRD's Annual Forum on Religion and Sustainable Development, stimulating conversations took place, with participants continuing discussions during the breaks and in the evenings. ©PaRD/GIZ 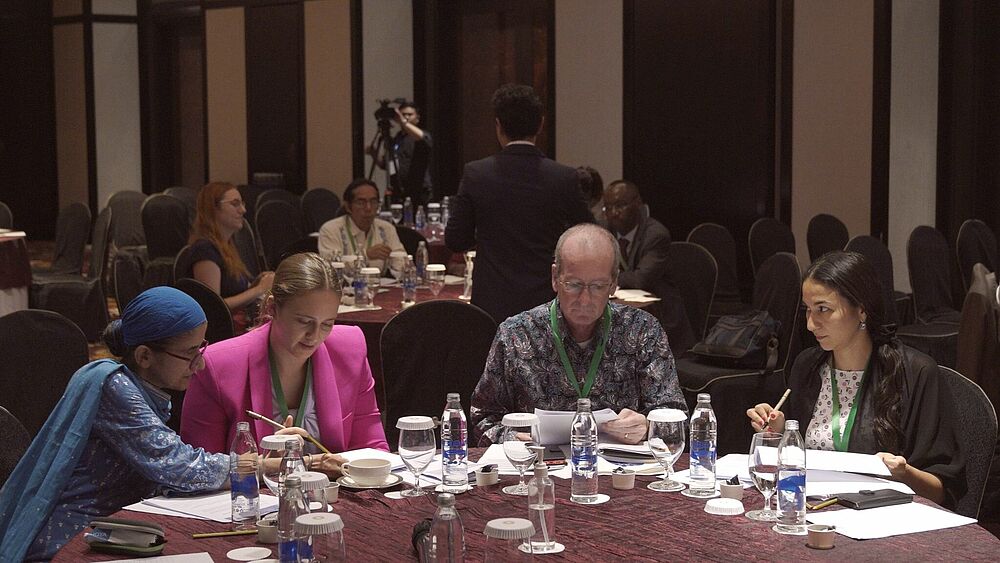 From panel discussions to interactive workshops, PaRD's Annual Forum on Religion and Sustainable Development offered the opportunity to approach a range of topics using different lenses, as seen here: Participants were given a fictional scenario to consider how they could help a 12-year-old climate refugee child through faith-sensitive mental health and psychosocial support (MHPSS). ©PaRD/GIZ

It was a spontaneous move, as representatives from Buddhist, Christian, Hindu, Jewish, Muslim, and Sikh faiths and Indigenous traditions grasped each other's hands, and proudly raised them together at the opening of the International Partnership for Religion and Sustainable Development (PaRD)’s Annual Forum. What united them is what also separates them in the eyes of many people – their belief, their spirituality, their religion, their tradition. But their actions sent a strong message: We are united in diversity, and we are stronger together.

“Bhinneka Tunggal Ika, or ‘Unity in Diversity’ is Indonesia’s national motto,” Khushwant Singh, Head of the PaRD Secretariat, explained in his opening speech at the Annual Forum. Singh described Bali, where the event took place from 31 October to 3 November, as a place where people strive for harmony – exemplifying the motto, which also applies to PaRD. Singh said, “This partnership is about ‘Unity in Diversity’. Its diverse members are united as they get a space for complementing and inspiring each other on a long-term basis at equal levels. So, it is no surprise that the PaRD leadership chose Bali for the Annual Forum during a time when G20 meetings are happening here.” He also spoke about the importance of developing a circular understanding of life and the need to unlearn linear and growth-oriented thinking to tackle the human-made climate crisis.

The need to involve religious, faith and Indigenous actors to achieve the Sustainable Development Goals (SDGs) and protect the climate, was stressed by H.E. Yaqut Cholil Qoumas, the Indonesian Minister of Religious Affairs (MoRA), during his official keynote speech. “Religion is a universal source of good. It is needed to solve the global challenges we are facing,” the minister said.

Being “United in Diversity” and knowing that we are stronger together is crucial for addressing humanity's greatest challenge: the climate crisis. As the October 2022 report of the UN Environment Programme states, the only pathway to limiting global warming to an increase of 1.5°C is an “urgent system-wide transformation” to cut greenhouse gas emissions by 45 per cent by 2030. The consequences of the climate crisis are already enormous with dramatic impact especially on future generations, shown by these examples from the emissions gap report:

The overall picture that emerged from PaRD’s Annual Forum shows how important it is to walk the talk. Here are 6 key recommendations for decision makers working on achieving the SDGs:

The six recommendations are based on intensive discussions during PaRD’s Annual Forum on “Faith and Partnerships in Addressing the Climate Crisis”, where more than 150 participants, including policy makers, religious and faith groups, Indigenous Peoples, academics, and grassroot activists, from around 35 countries came together. Prof. Dr. Kamaruddin Amin, Director General of Islamic Community Guidance, Indonesian Minister of Religious Affairs (MoRA), stated, "People see religious leaders as role models as well as behaviour references.” MoRA was a cooperation partner of the PaRD Annual Forum 2022.

A central theme of the Annual Forum was that the climate crisis affects us all. Only together, in cooperation with religious, faith and Indigenous actors, can we confront it. These groups have an enormous influence on how people behave towards nature and have often already internalised many positive approaches to “heal the world”. But the key to moving forward is to act now. “We focus so much on the next few years, ten years, but that seems far away. Every day we are losing time”, argued Mercy Munene, PaRD Steering Group member and Core Team Member with the Catholic Youth Network for Environmental Sustainability in Africa (CYNESA). She pointed out that youth are facing a lot of challenges, for example in terms of employment, and are experiencing the worst of the climate crisis.

Prof. Anne Poelina, Co-Chair of Indigenous Studies Nulungu Research Institute, University of Notre Dame Australia – and one of more than 70 speakers at the 41-session event – found memorable words: "Climate change is climate chaos. We cannot go on like this." She urged the world to give a voice to the muted and use the wisdom also of Indigenous Peoples to rebuild the world. Peter Prove, PaRD Steering Group member and Director of International Affairs at the World Council of Churches, echoed the need for prompt action in an appeal to participants: "Immediate emission reductions are needed to combat climate change by 2030. It is important to engage religious actors in this moral and ethical responsibility all people have to achieve this goal."

A plenary session on “ramping up contributions of religious actors to respond to the climate emergency” included speakers from religious and faith actors as well as from the UN and the Intergovernmental Panel on Climate Change (IPCC). Dr Ian Fry, UN Special Rapporteur for protection of Human Rights in context of Climate Change said, “Tragically there is a disconnect between those who are most vulnerable to the impacts of climate change and those who are represented today in the decision-making processes to combat climate change.” He explained that religious actors play a vital role due to having, “strong connection with communities, particularly those most affected as well as with decision making bodies. I rely on ongoing dialogues with FBOs to keep me informed.”

Prof. Debra Roberts, co-chair of working group-II of the IPCC 6th assessment report, cautioned us that, “Our current emission levels are highest in human history, and we are not on track to limit global warming to 1.5 degrees Celsius. If we continue business as usual, we could very well cross 3 degrees Celsius. This could mean in some regions the temperature increase could be much higher and practically can become unliveable”. On adaptation measures she stated, “Climate finance is the key and currently 90% of finance is going to mitigation and not to adaptation in developing countries. Faith communities are huge agents of change and have a unique opportunity to mobilise and scale up to influence the policy and action to address climate change.”

Harpreet Singh, co-founder of Sikh Teachings and part of the Sikhi Council, sees in the climate crisis a chance to question ourselves and our actions as humans: “This is a human crisis. It is human made. We need to focus on what is producing pollution inside us as the outer pollution is only the manifestation of the inner.” Similar words were expressed by Mindahi Bastida, Director of the Original Nations Programme The Fountain and member of the Mother Earth Delegation, clarifying that it is about rethinking the role of humans on this earth – our ways of acting and our patterns: "Many people have been trying to take over the world rather than taking care of it.”

At the Annual Forum, it was clear that more government officials are recognising the importance of religious, faith, and Indigenous Peoples in the fight for climate justice. “On a global scale, the environment is in a better condition wherever land is seen as a holy place”, said Frank Schwabe, German Commissioner for Freedom of Religion and Belief and Member of the German Parliament. He told the audience: “Land inhabited by Indigenous Peoples is treated with more respect than elsewhere. This is due to their spirituality, their interconnectedness with the soil. We as a global community have certainly a lot to learn from the positive examples of Indigenous Peoples.”

During his address the Italian Special Envoy for the Protection of Freedom of Religion or Belief and for Interreligious Dialogue, Dr Andrea Benzo, pointed out the difficulties faced by religious actors: “To play a meaningful role in advancing the Sustainable Development Goals (SDGs), religious or belief actors and communities need to be granted their right to organisational autonomy and to be able to operate without any undue restriction. At the same time, people need to be protected from any discrimination on grounds of religion or belief if they are to be both enablers and beneficiaries of sustainable development. Religious actors are both protectors and beneficiaries of Freedom of Religion and Belief (FoRB).”

During the Annual Forum, it became clear that the climate crisis is not just about nature, the environment, water, and waste. It is about sustaining peace, it is about health, it is about freedom – the climate crisis not only affects all people, but it also affects all levels of coexistence. The climate crisis also impacts gender equality, inclusion, and diversity. “It's time we mobilise faith actors to speak with one voice and to move in the nexus of environment and gender", argued Ann Kioi, Programmes Development and Fundraising Officer at All Africa Conference of Churches (AACC).

Recognising the unique role of civil society actors is important, but governments, religious, faith, and Indigenous actors, academics, and grassroots activists need to work together more often to change policies and frameworks.

Actions will fail if key stakeholders are excluded. Sobia Ibrahim from the Institute of Ismaili Studies in Pakistan points out that "climate change policy should take into account the needs of people affected by climate change." She was one of the Annual Forum’s younger speakers, arguing that climate adaptation requires youth-centred frameworks that draw on different faith perspectives to care for nature. Merylene Chitharai from South Africa’s Religions for Peace was also concise: "Young people are excluded from important conversations and decision-making processes. Yet we are the future leaders the world so desperately needs." Many young participants at the event impressed with their clear and authentic words, especially during the final session of PaRD’s Annual Forum. The stage was theirs to express wishes and urge all participants to listen. Young people had the last word. They should be heard. Because it is also their world.

The International Partnership on Religion and Sustainable Development (PaRD) was founded in 2016 by 12 members. PaRD has since grown to become a partnership of over 150 members with representatives from civil society, especially religious and faith-based actors, governments, multilateral entities, and academia/research institutes. The Annual Forum on Religion and Sustainable Development of PaRD is coordinated by the PaRD’s Secretariat, which supports members in implementing PaRD’s mission. The Secretariat's office is located at the Deutsche Gesellschaft für Internationale Zusammenarbeit GmbH (GIZ), the government owned German Agency for International Cooperation. To learn more about how governments, multilateral entities, civil society, especially religious actors, and academia are working together, visit PaRD’s Knowledge Centre.