First Equity, then Sustainability: There is hope to save the Earth when we put ourselves in the centre of change

At the United Nations Environment Programme (UNEP) Faith for Earth Dialogue opening session on February 21, 2022, Head of Secretariat Khushwant Singh underscores how PaRD members are working to be drivers of equity and sustainability in cities. 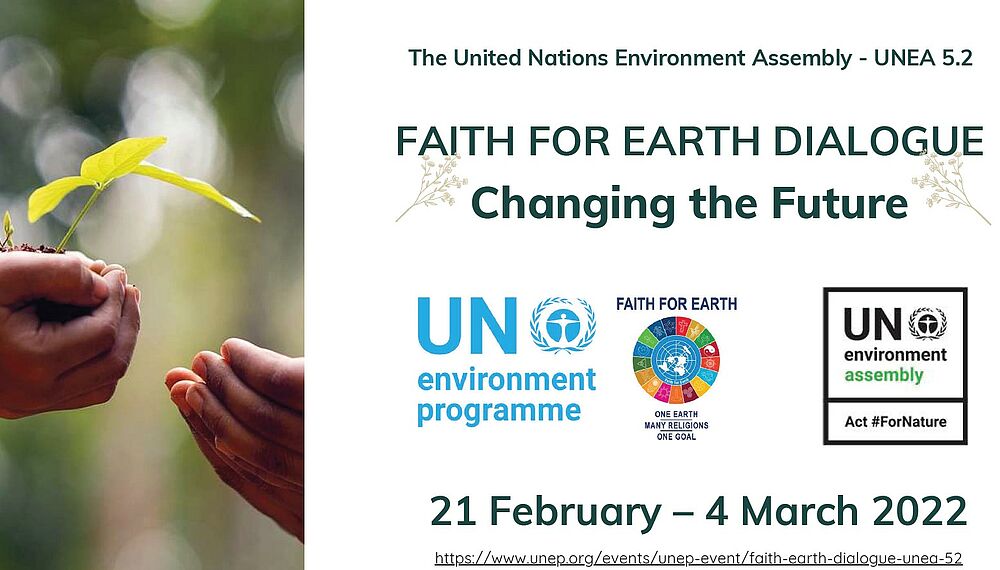 I very much appreciate that some of you even woke up in the middle of the night to join this thought-provoking UNEP Faith for Earth Dialogue session.

Religion is where religious people are. And cities are where more and more people are. The idea of living close to each other is perhaps as old as humankind itself.

Religious actors do their work amidst the people who are not safe, who are left behind, whose dignity is trampled upon. And since 4 out of 5 people worldwide feel connected to a religion, and many volunteers contribute to equity at different levels, their force and contributions are unique. By 2050, so in less than 30 years from now, 4 out of 5 people will also live in cities. Dr Iyad Abu Mogli from UNEP, our host, also pointed this out. So, there is an obvious tie between actors inspired by religion and work being done in cities, with and for the people.

I am glad that I can speak to you today. I will give you insights into how the International Partnership on Religion and Sustainable Development (PaRD), like an inclusive and open city, brings together people in one place. Our members are working towards equity and sustainability - also in cities – and thus contributing to the Sustainable Development Goals, the SDGs.

The order of these words is essential – first equity, then sustainability. There can be no sustainability if anyone is left behind. PaRD has a clear SDG-based mandate: to highlight the positive role of religious actors in sustainable development and humanitarian assistance. PaRD was founded in 2016 by 12 members. Since then, it has grown to become a partnership of 150 members from civil society, especially religious organisations, governments, multilateral entities, and academia. Aside from our focus on concrete SDGs, like environmental protection, peace, health, food security, and gender, our partnership itself embodies SDG 17, showing how global partnerships help tackle global challenges facing humanity.

The people behind the religious organisations, many of them volunteers, were not driven by salaries - but by love. Love inspired them to take every possible step to help those in need and towards more equity. They ensured that “leaving no one behind” is not mere lip service.

When speaking of cities, we might have our own idea of what the word “city” means. To keep it brief, I will look at it from two perspectives. First, cities are places of refuge. When a family flees natural disaster, conflict or other existential threats, it has the hope that everything will be OK if they just reach the next city. The city gives hope. Hope that they will no longer be deprived of safety. Hope for better medical facilities, jobs and educational opportunities. In this sense, cities can be a haven of safety. Like the walled cities of past times or an oasis to rest, cities can be places of protection, where infrastructure and state and civil society services make life better.

Secondly, cities can be a place where people and humanity are lost, where certain people are forgotten, discriminated or exploited as if they were biological machines designed to function for a capitalistic global market.

Others in this session, like Andre Dzikus, Beatriz Schulthess, and Dr Josh Yates, have also referred to these perspectives. While cities can be much more than just these simplified examples at the respective end of the spectrum, it helps us better understand how PaRD members are working in the cityscape to enhance equity and sustainability. So let us now look at some concrete examples.

I start with the Community of Sant’Egidio’s Humanitarian Corridors project. It supports refugees’ legal and safe entry into the European Union - in close cooperation with religious actors in Italy, France, Belgium, and Andorra. More than 4300 refugees from camps in Lebanon, Ethiopia, Libya and Lesbos have entered the EU via these humanitarian corridors.

The unique networks of such religious-inspired organisations, the trust people have in them, and the many volunteers they rely on allows religious organisations to support vulnerable people in existential crisis. And once these people in need get the opportunity to stay, live and work, they enrich the host countries in many ways. The so-called guest workers and the many people who had to apply for asylum and sacrificed a lot to become “insiders” are just a few to name.

Compassion not only for our fellow human beings but also for animals and plants and solidarity are at the heart of religion. So let us have a glimpse into the Kolping Indonesia Tree Project. It focuses on ecological and economic improvement. Over 200,000 trees have been planted in urban and suburban areas. Local tree planting committees became a means for organisational formation, where mutual learning, participatory planning and community-oriented decision making took place, and new partnerships with state and civil society actors were established.

But as outlined, cities are also places where people may be lost. Misso from Germany established the Shelter of Joy and Feeding Centre Program in the city of Manila. The centre is a second home to vulnerable and marginalised children. These children often pick garbage on the polluted seashore of Manila Bay. The Feeding Centre is a safety net for these children.

The Adyan Foundation promotes equitable and inclusive living across Lebanon. After the August 4, 2020, explosion in Lebanon, the PaRD member supported “Mariam’s kitchen”, which provided more than 150,000 meals at the height of the crisis. Today they serve over 800 meals daily. Their slogan is “We share a lot of love with a little food, without discrimination”.

Our PaRD member organisations who are inspired by religion could share many more examples from all over the world. Especially during the height of the current pandemic, religious actors risked their own lives to help those in need.

Bahais made sure that families were not isolated by creating online interactions, offering a decentralised spiritual education service open to everyone. The courses tend to the moral education of children and facilitate the spiritual empowerment of young adolescents, also in times of crisis. A similar project was developed by Arigato International and other PaRD members.

Buddhists, for example in Taiwan and Thailand, spread awareness about vaccinations and took a stand against fake news and hate speech.

Sikhs shared uplifting spiritual wisdom, also called Langar (ਲੰਗਰੁ ਚਲੈ ਗੁਰ ਸਬਦਿ ਹਰਿ ਤੋਟਿ ਨ ਆਵੀ ਖਟੀਐ ॥), food of the soul, which is at the heart of Sikhi, the Sikh Religion, online and through social media. At the same time, Sikhs distributed several hundred thousand meals free of cost daily worldwide not only in their community centres but also for those who were isolated or too weak to cook or buy food. They raised awareness about fake news and gave moral support via helplines. In India, for instance, they provided oxygen when hospitals were overwhelmed with COVID-19 infected patients.

All the religious actors mentioned here and also those I could not name today, tried their best that the agency and dignity of the ones forgotten by those who are actually in charge were restored.

If you want to dive deeper, I encourage you to join the session with our PaRD work-stream “Water, Environment and Climate Action,” in short “WECARE”. It will focus on “The Power of Faith Partnerships to Safeguard Nature” on Wednesday, March 2, 2022, at 14.00-15.30 (Eastern African Time, 12.00-13.30 CET). Before I come to the end, let me emphasise: Whatever background we may have, we can be those who maintain what surrounds us, or we can be those who destroy it. It is our choice.

Young climate and peace activists rightly say: We are all facing the same storm. The only difference is that many sit in a dinghy, others in a tanker, and some in a cruise ship.

Today, we have come together to dialogue because we want to save those in need and what Mother Earth unconditionally provides for.

As a Sikh, I need to stress that technological solutions alone will not save us and the wonderful blue planet which we are visiting as guests.

And in all humility, it is indeed the responsibility especially of those who regard themselves as religious people, to be at the forefront of change.

I thank you and wish all of us inspiring discussions!