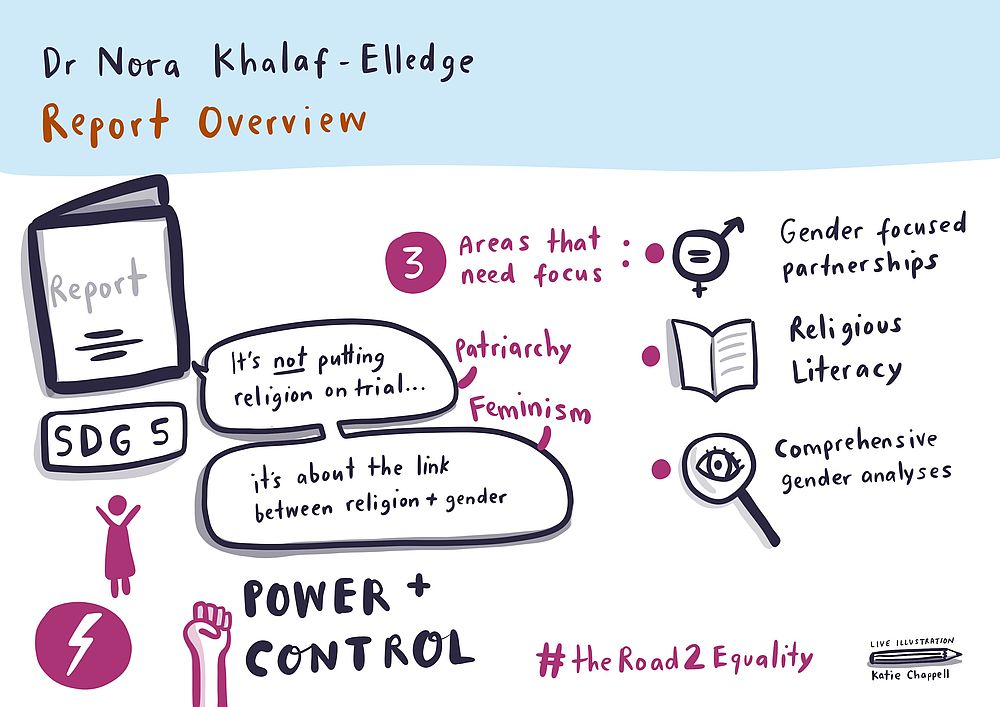 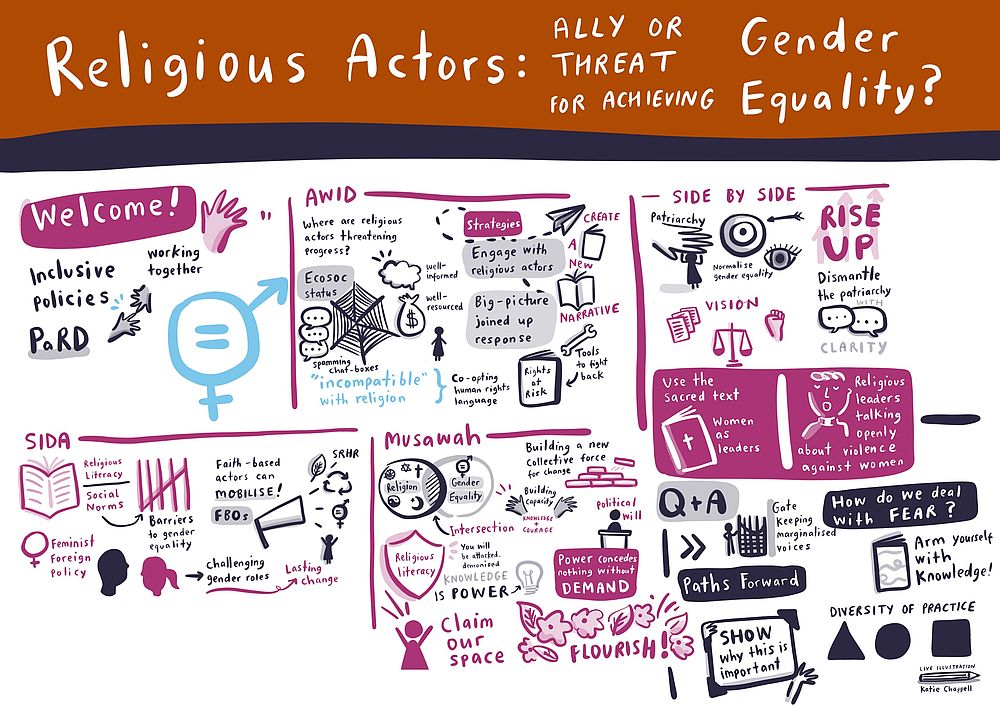 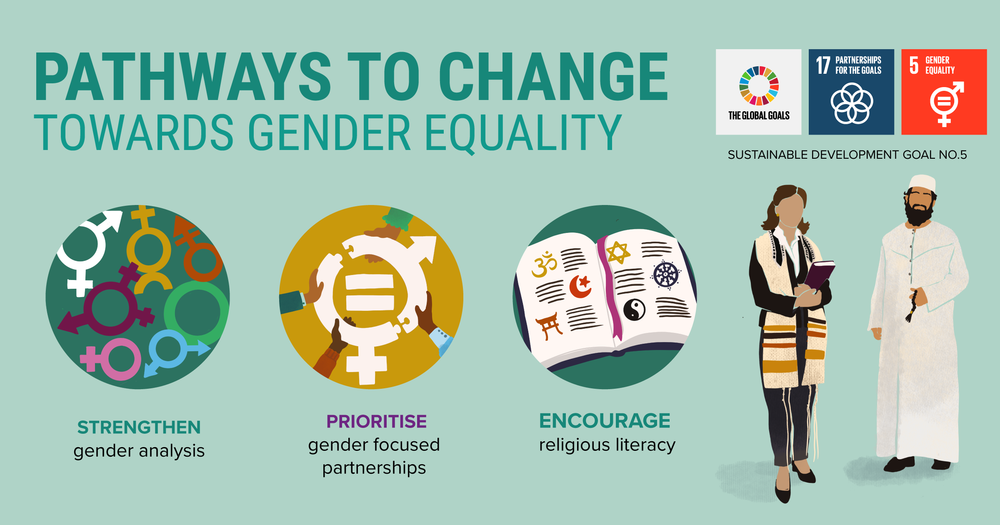 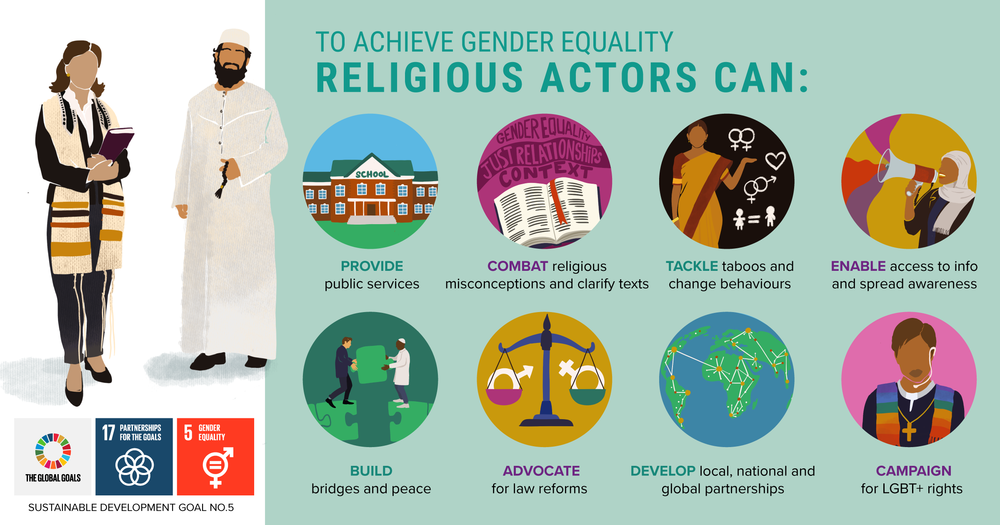 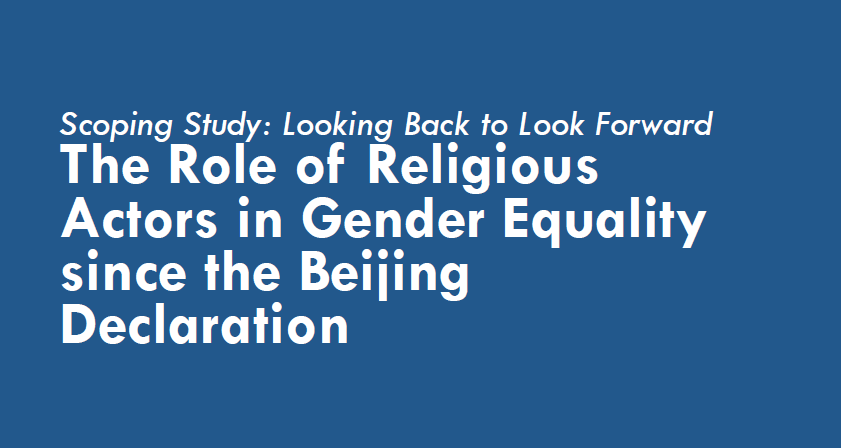 At a time of rising fundamentalisms, which are pushing back hard against women’s rights at every level and across the world, a new report ‘Looking Back to Look Forward: The Role of Religious Actors in Gender Equality since the Beijing Declaration’ argues that understandings of the gender-religious nexus is critical for achieving Sustainable Development Goal 5: Gender Equality.

Nearly 84 percent of the world’s population identify with a religious group. The report, authored by Dr. Nora Khalaf-Elledge, reveals how religious actors have advanced and hindered gender equality since the adoption of the Beijing Platform for Action and Declaration in 1995. The report provides a critical and contextualized understanding of how religion and gender politics are intertwined in all countries, high and low-income alike.

The report addresses how patriarchal gender norms continue to be packaged in the language of religion because it legitimizes them. Anti-rights actors are mobilizing religious language to block or even reverse progress on gender equality. Religious language can make patriarchal practices appear divinity ordained and unchangeable.

For example, although 189 states have ratified the 1981 Convention on the Elimination of all Forms of Discrimination Against Women (CEDAW), many countries still maintain reservations to specific articles of the convention. Over 60 percent of the 440 recorded reservations are religion-based.

The report also profiles the work of religious actors, who are advancing gender equality, from maternal health to LGBTQI+ rights. The examples given in the report show how religious leaders and actors are often trusted voices within communities. Religious actors can be critical changemakers, in advocating for stronger gender just laws, challenging social norms, acting as moral compasses and legislators and stepping in, when governments fail to provide social protection.

The new report is co-published by several religious actors, ACT Alliance, Act Church of Sweden, Islamic Relief Worldwide and Side by Side, in partnership with the International Partnership on Religion and Sustainable Development, the Joint Learning Initiative on Local and Faith Communities, Sexual Violence Research Initiative, and Goldsmiths, University of London.

Choosing partners who are leaders on gender issues in their contexts: International collaboration and partnerships are pivotal for achieving all SDGs, especially now as the world tries to recover from the global COVID-19 pandemic. Achieving SDG 5 is deeply interconnected with achieving all SDGs.

Encourage religious literacy: Development agencies need to provide training throughout their organizational structures that conveys a basic understanding of the ways in which religious discourses are context-specific, historically situated, internally diverse, continually reinforced and altered by both internal and external factors.

Conducting comprehensive gender analyses prior to projects and partnerships: A comprehensive, context-specific, and theory-based gender analysis can highlight the religion-gender intersection in each locality and facilitate the inclusion of religious actors. It can also uncover the patriarchal power dynamics behind religious arguments supporting gender inequality.

As world leaders, institutions, civil society, and faith actors virtually gather at the Generation Equality Forum Paris, we must find common ground and together work to counter rising fundamentalisms, strengthen progressive movements within faith communities, women’s leadership and demand the action required for achieving the Beijing Platform for Action.

"It is important to change the conversation on gender and diversity - and change decision-making based on inclusive policies as outlined in the Agenda 2030. This is what human rights and democracy is about. I invite all like-minded people to join hands and work together in a respectful manner. PaRD is a multilateral partnership which provides a safe space to support such matters. Together with governments, intergovernmental entities and religious actors, over 140 members in PaRD support initiatives on equal rights and justice. I hope that more women and men, including from often overlooked religions like Baha'i, Buddhists, Daoists and Sikhs get the opportunity to join partnerships like PaRD so that new ideas and collaborations arise." Khushwant Singh, PaRD Head of Secretariat

Link to the report here.

Watch the launch of the report here.