Despite being caught up in the fallout of the military coup, Myanmar’s religious actors are working together to protect human rights. 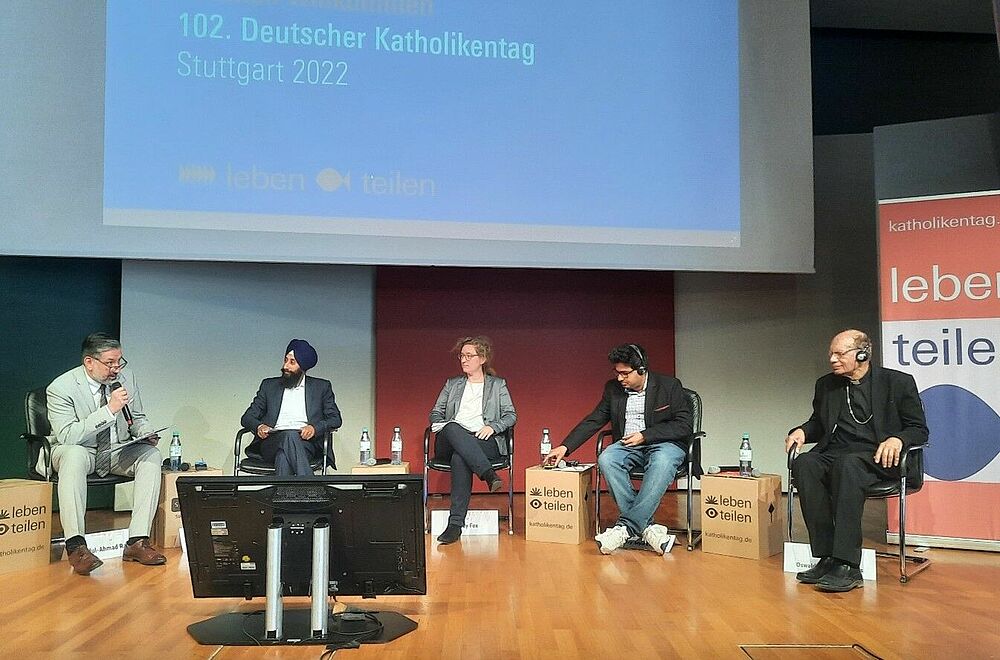 Panelists on 28 May 2022 in Stuttgart: The mission of religions: Making and keeping peace. Cross-religious peace work in Myanmar. © Khushwant Singh

After the ousting of the democratically elected government in February 2021, the civil disobedience movement, initially started by healthcare workers, was quickly joined by civil society actors, including religious groups. Buddhists, Christians, Muslims, and Hindus have publicly opposed the military-run State Administrative Council.

With Myanmar’s history of religious and ethnic conflict - religious representatives speaking out against the military takeover - there is a potential that past conflicts may be used to create discord among government opposition. Experts on Myanmar confirm that some individual actors create problems in the name of religion and thus discrediting religion per se. But Myanmar’s deep spiritual roots are counterbalancing attempts to create division. Sai Sam Kham, a Buddhist from Myanmar, says if religions won’t stand together for “human rights and against violence, we will become irrelevant as religions in the long run.”

Kham was speaking at a panel during the annual Katholikentag in Stuttgart, Germany, on 28 May 2022. The panel, organised by Misereor and the International Partnership on Religion and Sustainable Development (PaRD), brought together religious representatives and experts to look at the role of religious actors and those affected in crisis regions and what can be learned.

The Covid-19 pandemic kept Myanmar’s borders closed until April 2022, while military authorities restricted humanitarian access to some areas with internally displaced people. Healthcare workers were targeted, limiting civilians’ access to healthcare. People in areas affected by the conflict lacked essential services, women and girls were subjected to sexual violence by the military, and children were denied education.

Local religious actors in Myanmar coordinated efforts and stepped in to provide humanitarian and pastoral support. Religious institutions have long operated as social safety nets, offering shelter, food, education and even health services. According to Catholic Cardinal Bo, in a video message from Myanmar, religions are an essential part of civil society, and they must “stand together and stand up for democracy and human rights despite all odds.” Indian Cardinal Gracias emphasised that “religious leaders in particular must engage much stronger beyond their own communities.”

In a country where over 50% of the population lives below the poverty line and an estimated 1 million people are internally displaced, Harry Myo Lin, a Muslim from Myanmar living in exile in Europe, explained, “religion strengthens our resilience and gives us hope to carry on.”

Lin, who works for the King Abdullah Centre for Interfaith and Intercultural Dialogue (KAICID), also described the different resistance activities that religious actors use to lessen or prevent military violence.

When civil society actors have platforms to communicate and cooperate, they can identify and reach shared goals, and in Myanmar, this also prevents groups from being instrumentalised. In August 2021, religious’ actors there created an inter-religious group to support the protection of human rights. Panel co-organizer PaRD was created in 2016 as part of the growing recognition that civil society, including religious actors, governments, and multilateral organisations, can achieve more when they work together. Head of PaRD Secretariat Khushwant Singh commented, “More than ever, we need to create safe spaces for long-term dialogue at equal level among key stakeholders.”

How religions are working towards achieving the United Nations’ 2030 Agenda was shown during the event with the new short film Religion Matters! The video was produced by GIZ, the German Agency for International Cooperation, on behalf of Germany’s Federal Ministry for Economic Cooperation and Development (BMZ), which is also currently the main funder of PaRD.