According to Faith for Earth Panel participants, PaRD connects people, religions, and governments for positive and agile environmental impact. 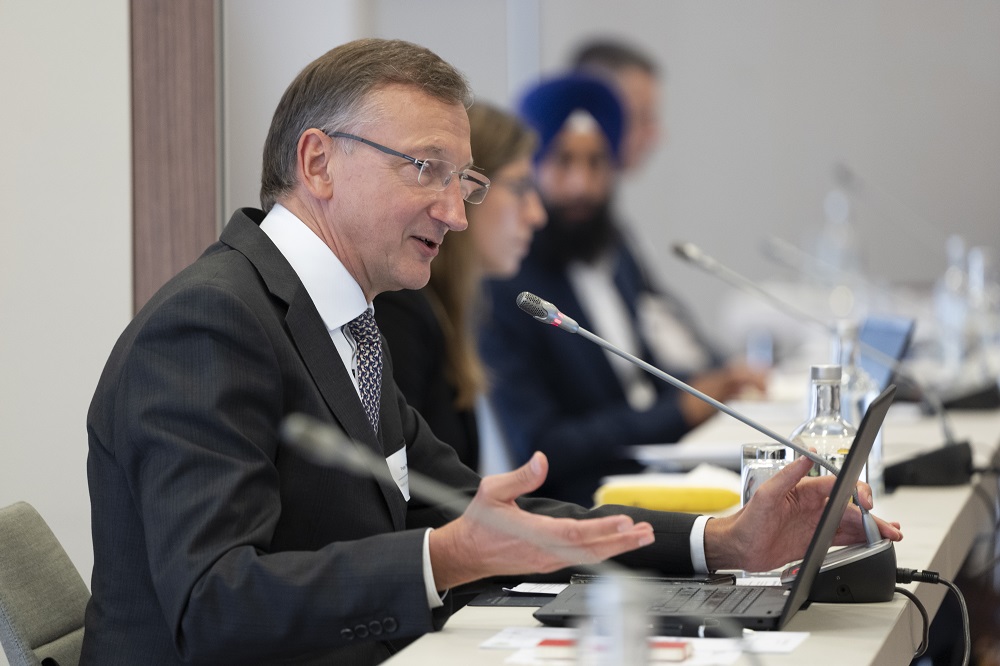 Peter Prove, co-chair of the International Partnership on Religion and Sustainable Development (PaRD), speaking during a PaRD meeting in Berlin. © GIZ/PaRD by Maurice Weiss

In March 2022, members of the International Partnership on Religion and Sustainable Development (PaRD) presented how religious organisations work to protect the environment. The event took place within the framework of the United Nations Environment Assembly 5.2 (UNEA), facilitated by the UN’s Faith for Earth (UNFE) initiative.

Peter Prove opened the March 2, 2022 panel titled: The Power of Faith Partnerships to Safeguard Nature: PaRD, a case in point. Prove said PaRD is a vital part of the broader collaboration for confronting the “greatest challenge of any generation: that of promoting sustainable and inclusive development in a world facing an accelerating climate catastrophe.”

Archbishop Schirrmacher, Secretary General of the World Evangelical Alliance (WEA), joined from the UNEA in Nairobi and began the panel by describing the link between all people and all religions. The archbishop spoke of how inter-religious cooperation can be approached from different levels in different situations. In some communities, it is already at a grassroots level, while in other cases, agreements on the global level help inspire cooperation at lower levels. Schirrmacher sees the earth as a home where solutions cannot be compartmentalised. “Only fixing one room will not stop the rain from coming in through the roof at wintertime,” he said.

Jean F. Duff spoke of PaRD’s role in bringing governments, religions, and other organisations together. According to her, partnerships need to be deliberately and intentionally expanded to be more inclusive. Duff, President of the Partnership for Faith and Development, would like to see more intentional linking between faith-inspired and secular stakeholder constituencies, like joint projects for Fridays for Future and the Catholic Youth Network for Environmental Sustainability in Africa. Duff said there is an “unrealised potential of the faith sector and how the impact of faith action can be upscaled by broadening partnerships.”

Prof. Katherine Marshall reminded that acknowledging the power of partnership and interconnectedness does not mean that all people are equally affected by climate change. Marshall, the Executive director of the World Faith Development Dialogue (WFDD), told participants that a resounding “commitment to justice is very much part of the environmental challenge, and it is also very much an objective of PaRD to address the unfairness.”

Speaking as Director of the Commission of the Churches on International Affairs, World Council of Churches (WCC), Peter Prove encouraged a rethinking of how religious organisations view their influence. He said that action plans might seem small on individual levels, but they have a significant impact when whole religious constituencies take them on. According to Prove, if global religious constituencies shifted pension programmes and other investments away from fossil fuels, the finance sector might rethink its behaviour.

Sadhvi Saraswati, President of Divine Shakti Foundation and Secretary-General of GIWA, spoke of a rethinking in terms of each person’s place in the world. She pointed out religion’s mandate to care for creation and said, “we live in a world where, if someone downriver is suffering or dying due to polluted water, whether due to your action or your inaction, their blood is on your hands.”

Rabbi Awraham Soetendorp, the Founder of Green Cross International and GIWA, concluded the speakers’ presentations by reflecting on global politics. The Rabbi pointed out that religions can influence politicians and national governments beyond national interests. Soetendorp repeated the advice given to him by Mark Rutte, Prime Minister of the Netherlands, that together religious communities must continue to “make life difficult” for politicians and governments to make them more aware of their key responsibilities for the planet.

More information on the activities of the featured organisations can be found by watching the panel discussion. The speakers are members of PaRD’s WeCARE work-stream. WeCARE focuses on how religious organisations help achieve the United Nations’ sustainable development goals (SDGs) by focusing on Clean Water and Sanitation (6), Climate Action (13), Life Below Water (14), Life on Land (15), and Cross-Sector Collaboration (17).