That religion and religious actors are essential for the 2030 Agenda is accepted by many, but formal structures for cooperation with governments need to be strengthened. 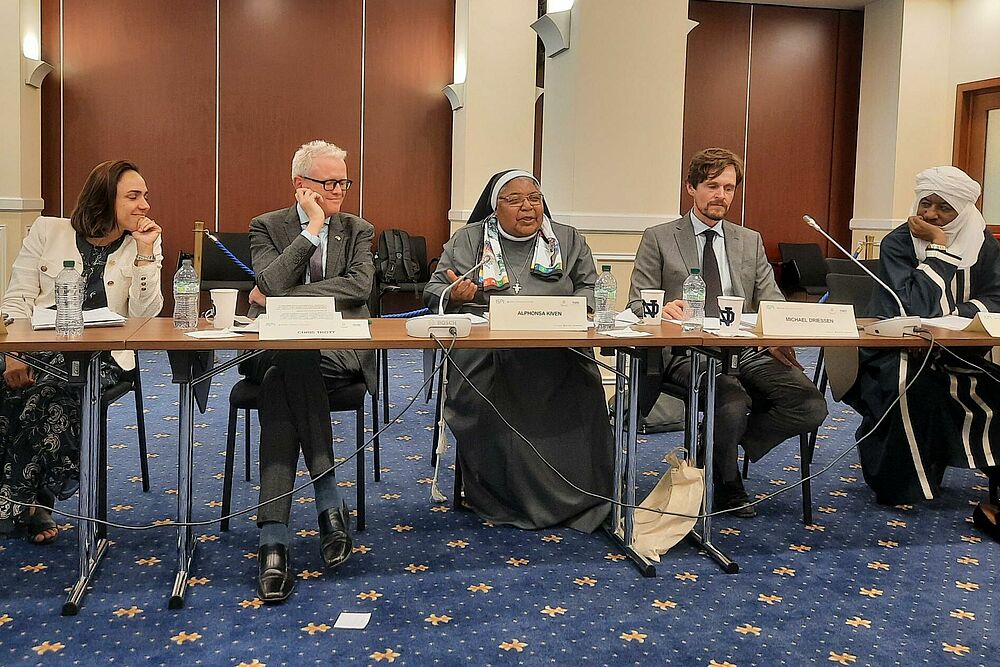 The growing number of special envoys for Freedom of Religion and Belief (FoRB) strongly indicates that governments and multilateral organisations recognise the critical role of religion and religious actors. With Dr Andrea Benzo, Italy recently appointed a FoRB Special Envoy for  the very first time. He will also be responsible for creating a conducive environment for interfaith dialogue and coopearation – his full title being Special Envoy for FoRb Protection and Interreligious Dialogue.

Leading researchers and representatives from governments, multilateral entities, religious and other civil society actors met in Rome on June 23-24, 2022, for Italy’s National Development Cooperation Conference COOPERA 2022, organised by Italy’s Ministry of Foreign Affairs and International Cooperation (MAECI) and an adjacent exchange organised by the Institute for International Political Studies (ISPI), Notre Dame’s Keough School of Global Affairs and the International Partnership on Religion and Sustainable Development (PaRD). During both events there was consencus among the participants that the cooperation with religious actors who are contributing to sustainable development should be better rooted into the structure of government ministries. The results of the deliberations where published in a policy brief authored by Fabio Petito and Andrew Dickson entitled Religious Engagement & the SDGs: A View from Rome.

From Pilot Projects to Established Partners

In recent years several foreign ministries and international development agencies have launched pilot projects with funding streams focused on partnering with religious actors to work towards achieving the Sustainable Development Goals (SDGs). After a wide-reaching global consultation with civil society, of which religious actors make up the majority, the United Nations replaced its Millennial Development Goals (MDGs) with the 17 SDGs in 2015. Including input from religious actors in the 2014 survey that led to the SDGs set the stage for more and better cooperation. However, the aspect of religion for sustainable development is not prominentely reflected in the SDGs.

We must be able to explain to stakeholders, donors, taxpayers, voters, community members, and many others how and why civil society, including religious actors, needs to be a part of sustainable development.

In Rome it was discussed how new partnerships between religious actors, governments and multilateral organisations are being and should be evaluated, what lessons have been learned, and which strategies for religious engagement in sustainable development create the most impact.

Marina Sereni, Italy’s Deputy Minister of Foreign Affairs and International Cooperation opened the panel Religions and the SDGs: Why it Matters by establishing that the “relevance of religions to advance peace, mutual understanding, and development is now widely recognised.” Dr Fabio Petito, head of ISPI-MFAIC Programme on Religions and International Relations and the panel’s chair, said “religion has a powerful message and religions actors help governments and international organisations stretch their imagination and create new and innovative practical solutions.”

Normalising what Religious Actors Normally Do

Progress being made to include religious actors in discussions, policy-making, and sustainable development is because of the overlap between sustainability and the orientation of religion, according to Alphonsa Kiven, General Councillor, Tertiary Sisters of Saint Francis. Sister Alphonsa pointed out that religious actors have been working towards achieving the goals of the 2030 Agenda long before the agenda was created.

The conference – and others like it – show how governments and multilateral organisations increasingly prioritise partnerships with religious actors. The Deputy’s statement at the public panel and the statements from many other high-ranking political officials are part of a significant trend to normalise religious actors working with governments, according to Khushwant Singh, Head of Secretariate, PaRD. Singh says governments and civil society need to get used to discussing successful cooperation but also challenges at equal level and argued for well anchored and financed long-term alliances, which bring all key entities at one table to work for the well-being of all the people and the planet: “We need to be able to explain to stakeholders, donors, taxpayers, voters, community members how and why civil society, including religious actors, is needed to contribute to sustainable development. That is why we produced a short film called Religion Matters! on behalf of the German government, BMZ, the curent key funder of PaRD.”