The new programme outlines specific actions and strategies that any church can adopt in response to pressing challenges impacting children around the globe. 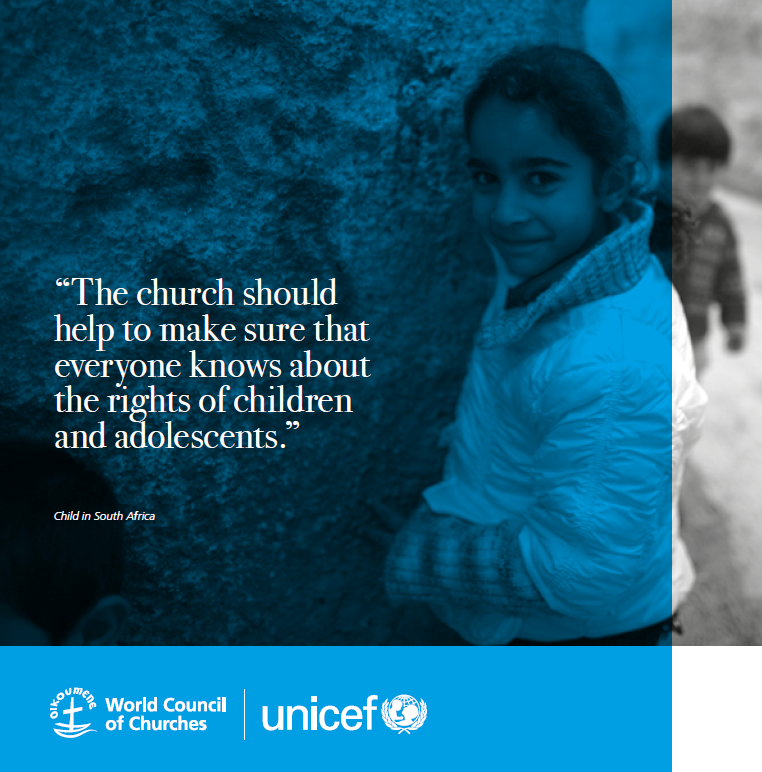 A new programme “Churches’ Commitments to Children: Churches uniting for children in the pilgrimage of justice and peace” has been launched, spearheaded by a cooperation between PaRD member UNICEF and partner the World Council of Churches (WCC), with support from PaRD partner ACT Alliance. The programme aims to address the needs of children as an integral part of the ecumenical commitment to the pilgrimage of justice and peace, an initiative of WCC member churches to work collaboratively to reach common goals of global justice and peace.

The Commitments outline specific actions and strategies that any church can adopt in response to pressing challenges impacting children around the globe, and will be disseminated among all WCC member churches and ecumenical partner organisations in 120 countries.

The Churches’ Commitments are orientated around three topics; (1) to promote child protection through church communities – including contributing to ending violence against children, (2) to promote meaningful participation by children and adolescents both in church activities and society at large, and (3) to raise church voices for intergenerational climate justice, supporting initiatives for and with children and young people.

Long-term sustainable development is also implicit in the goals of the Commitments, as the report notes that violence experienced at a young age can have long term consequences for society at large, including obstructing economic growth and impeding social cohesion. Working closely aligned with the United Nations SDG’s, including 16.2 (ending all forms of violence against children) and 5.3 (eliminating all harmful practices, such as child, early, and forced marriage and female genital mutilation), the Member Churches will work towards raising community awareness that can help end challenges faced by the world’s youth. These include tackling harmful traditional practices that may be related to religious and socio-cultural beliefs, including FGM, early marriage, and gender-based violence. In addition, the PaRD partner ACT Alliance (“Action by Churches Together”), which coordinates the work of Churches in humanitarian settings, will make its national and regional forums available to WCC’s Member Churches to support them in developing disaster preparedness and prevention strategies, in order to cope with the effects of natural disasters and armed conflict on children.

The programme has been in the making for years, first formulated as a response to the joint declaration “Putting Children at the Centre” announced at the 10th General Assembly of the WCC in Busan, Korea, November 2013. The declaration was signed by 18 member churches and partners of WCC following a working group during the Assembly bringing together member churches, ecumenical partners and related organisations. Over 144 children from church parishes in 6 different countries were consulted in the drafting of the Commitments, alongside theologians and experts from member churches and the WCC’s Commission of Churches on International Affairs (CCIA) supported by UNICEF.

Church communities are invited to contribute to the development of the Commitments by discussing their experiences within decision-making bodies, and ensure that they are a living resource for others. The programme will raise awareness of resonances that exist between Christian responsibilities towards children and children’s rights as expressed in the UN Convention on the Rights of the Child, reducing conceptual barriers to joint virtuous action.

Churches have the capacity to cultivate societies that support and respect children, and tremendous potential to strengthen child protection mechanisms along with other partners including local institutions, governments other faith groups – and children themselves. WCC’s programme aims to use that capacity to strengthen action with and for children.